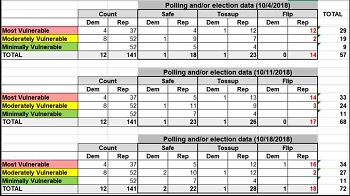 The House of Representatives is different.

Yesterday, Louisiana pollster John M. Couvillon  of JMC Analytics and Polling issued his scorecard on the House. Below, is his analysis. Keep in mind, elections in the last weeks, especially in the last days can be very fluid. Inevitable is anything but in the era of Trump as we know based upon the election of 2016:

In the run up to the November elections, JMC has been assessing the partisan climate of 435 US House races using a combination of election and polling data. In making these assessments, JMC has noted that over the last generation (roughly around the beginning of the Clinton administration), substantial numbers of “straight ticket” voters have begun to vote the same way for Congressional and legislative races as they do for President. Given that election reality, the 2016 Presidential vote for all 435 U.S. House districts is a good place to start for (theoretically) assessing how “solid” a House district is for either party. The following criteria are used:

Most vulnerable: a House Republican represents a district that gave President Trump less than 50% of the vote in 2016 (or a Democrat representing a district President Trump carried with an absolute majority). 41 districts meet this criteria (37 represented by Republicans, 4 by Democrats). These districts narrowly supported Hillary Clinton 47-46% (about the national popular vote), and in a partisan wave, these districts are likely the first ones to flip;

Moderately vulnerable: a House Republican represents a district that voted between 50-55% for President Trump in 2016 (or a Democrat representing a district President Trump carried with a plurality of the vote). An additional 60 districts meet this criteria (52 represented by Republicans, 8 by Democrats). These districts overall supported Trump 52-43% over Hillary Clinton, so these districts hypothetically (without taking into consideration candidate strengths/weaknesses) have “Republican votes to spare”, and would therefore be less likely to flip in the “straight ticket” environment of today, unless the partisan wave were substantial;

Minimally vulnerable: a House Republican represents a district that voted between 55-60% for President Trump in 2016 – except under extraordinary circumstances, the assumption here is that even if the Republican candidate is weak, there are more than enough “Republicans to spare.” 52 districts (all Republican held) meet this criteria, and these districts supported Trump 57-38% over Hillary Clinton;

Given the detailed criteria above, JMC is watching 153 House districts (141 held by Republicans, 12 by Democrats) – the assumption for the remaining 282 House districts is that the Trump (or Clinton) percentage is high enough for it to be extremely unlikely for any of these seats to flip.

Given that the Presidential percentage is more theoretical in nature, what does actual polling data (or in the case of nonpartisan primaries in California and Washington State, primary election data) say? (Caveat: polling/election data is only available for 72 of the 153 House seats placed on the “watch list”)

Most vulnerable seats (34 have poll and/or primary election data)

16 Republican and 1 Democratic held seats are trailing by 5 or more points, and therefore, these seats are likely to “flip” (was 14 Republicans last week);

12 Republican seats are too close to call (was 9 last week);

1 Democratic seat is too close to call (was 0 last week);

2 Republicans are trailing by 5 or more points (was 3 last week);

7 are safe Republican (no change);

4 Republican seats are too close to call (no change).

To summarize, this sample of 72 House races (out of a population of 153 House districts) where polling and/or election data is available shows the following:

If this sample of 69 were extrapolated to the entire population of 153 seats on JMC’s “watch list”, that would suggest a net Republican loss (now that Democrats are trailing in a race in Minnesota) of 21 seats (23 last week), with 58 additional Republican seats too close to call (was 58 Republican, 4 Democrats last week).

What is the political complexion of the “too close to call” seats ? These seats on average voted 49-45% for President Trump while at the same time supporting the Republican incumbent in 2016 with 57% (in other words, Congressional Republicans ran 8 points ahead of President Trump in 2016). The fact that these seats are 6 percentage points more “Republican friendly” than the national average is indicative of the Republicans problems in the House.

For seats where Republicans are trailing, Clinton carried these districts 49-45% – two percentage points more Democratic than the national average. These same seats also voted 54% Republican in 2016 Congressional races (in other words, Republican candidates ran 9 points ahead of President Trump). Given that President Trump’s approval ratings have lately hovered around the mid 40s nationally (in other words, what his 2016 popular vote share was), that, combined with the reality of “straight ticket voting” is why these Republicans are in trouble, since these vulnerable Republicans haven’t established an identity independent of the President.

Now that the Kavanaugh nomination is in the rearview mirror, it does seem that there has been some partisan benefit to the Republicans, although that benefit won’t help much in House races, since battleground races are generally on marginal electoral turf where any recent Republican mobilization will be offset (and then some) by heightened Democratic enthusiasm that has been apparent from the advent of campaign season (Democratic primary turnout was 77% higher than it was in the 2014 primaries, while Republican turnout was only 25% higher).

Republicans face an additional challenge as they are fighting to hold into the House: Democratic candidates/challengers are out raising (and in several dozen cases, substantially out raising) Republican candidates, so they have adequate funds to get their message out. More specifically, a recent National Journal article showed that 92 Republican incumbents were outraised by Democratic challengers.

As additional House race polls are released, this analysis will be revisited; the point of this analysis was to show (using available Presidential, primary, and polling data) why Republicans face the very real possibility of losing their House majority for the first time since 2006.