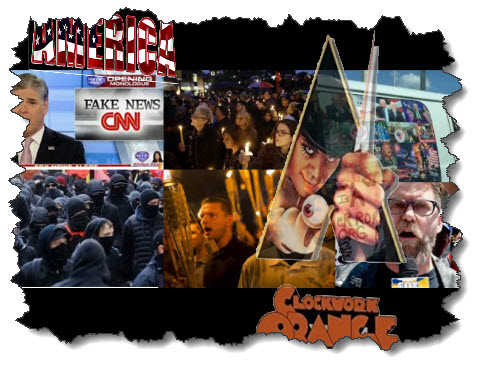 The greatest outrage, one that fixed our departure for good, was the crazy person who moved next door. He would prowl the property line, on his side of the fence, shielded by fifty-year-old Cypress, and made tiger growls as he marched up and down with a machete. Police, who had more serious problems, nearby, weren't very helpful. The point is that over time the extraordinary can become normal, and that which is fearful no longer shocks, until it's next door.

When it's necessary to arm teachers, ministers, priests, and rabbis, the transformation of society into a Clockwork Orange world is pretty near complete. When racism and fascism can march with impunity, with only mild disapproval at the highest levels, values of leadership are suspect. When truth tellers are branded as liars, if tolerated, the truth cannot long survive. We are in the midst of an anarchy that has few precedents. The attempted transformation of the judiciary into a pantheon of "yes" men (and women) completes the values coup. I believe it's too late to make peace with those who walk like tigers. You cannot reason with them, for they'll never be content with logic, or facts, that challenge prejudices officially encouraged. Ignorance, especially, willful is the real enemy of a free society.

More in this category: « Trump is not anti-Semitic, but his and others' words really matter Et tu Paul Ryan slams Trump's birthright citizenship plan »
back to top