There are so many areas of vulnerability for President Trump and his family that a creative cable network could cover the topic 24/7/365.  Oh, they do? Sorry. Forgot.

Here are just some of the areas that are worthy of a probe, or two, or more, perhaps:

The efforts by the White House to impede, interfere or disrupt any of the ongoing investigations, whether it be the Mueller probe or prior House and Senate inquires;

Whether Donald Trump Jr. lied to Congress when he previously testified?

Whether any of the witnesses who were not previously subpoenaed by the Republican-led House have a different view of the facts, once they are brought before the same (but this time, Democratic-led) committees? This time, however, they will be compelled to answer, not given a free get out of testifying card.

Whether Donald Trump has violated the emolument clause of the US Constitution as a lawsuit is claiming right now in federal court. The allegations are that Trump and his little Trumpees are making lots of money off foreigners. There is evidence that his DC Hotel and other lodgings are doing very well, شكرا جزيلا ( otherwise known as merci beaucoup.  Trump, instead of divesting which would have eliminated potential conflicts of interest, decided to maintain full ownership of his part of the business. In fact, just this week, sonny Eric tried to Make Trump Richer Again by hawking Christmas ornaments, sans Presidential Seal.

Has the Mueller probe presented information that might be impeachable?

Did President Trump, while a candidate or as president-elect or as president engage in any unlawful activity that would be considered a violation of the federal campaign laws, such as paying off some ladies after a stormy or two affairs?

Did or does Trump have any financial ties with the Russians or the Saudis that he has not disclosed and that might become apparent once the so-called ongoing tax auditing has completed? He insists that his income tax papers are so voluminous and complicated, Americans would not understand them and by the way, don’t care one wit, anyway.  Perhaps. That last argument they Americans don’t care had weight after his 2016 victory. Yet, now that the elections 2018 were a vote for him, maybe not so much. Something tells me that the House of Representatives just might feel they can crack the IRS code, if given the opportunity or two.

What role did the fly-by-night current House Intel head, Rep. Devin Nunes and others play in trying to disrupt the House investigation?

Let’s face it: The list is long and deep.  The above enumerated only scratches the surface, I suspect. Investigations are perilous to the future of Donald Trump and his family and cohorts that the president has told the world that if the House investigates him, he will shut down any future working together with the Democrats. In a awesome show of determination, Trump seemed to threaten pushing the Republican-led Senate to do his bidding on their own side of the scrimmage.  Then, now that he has installed his hand-picked Attorney General temporary replacement who was the one attorney out of millions who had the right stuff to replace Jeff Sessions, who knows what’s ahead. Forget that a Trump war on the House would essentially shut down healthcare improvements, infrastructure, the Wall and all other top shelfs, the president is telling us, that’s the price to pay should the House starts digging.

So, perhaps it is time to ponder: “Ask not what the investigations can do for you. Ask what you can do for the investigations”. Ultimately, the question becomes who wins and at what cost, should any of the above goes under the government oversight knives, come January 2019? Are any of these potential administration soft-spots worth the probe?  As the president has threatened, should a full blown war break out, would it inure to the benefit of the Democrats, the Republicans or neither? How might would these short-range missiles of inquiries darken the election 2020 skiesWill the Dems become the party of “no” and the “Party of Investigative probes”?  Will the Republicans be the party of Trump enablers? 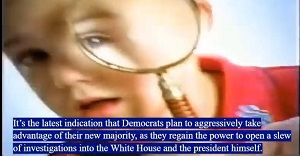 Then, let’s not forget a little thing called history. Do the Republicans, who spent seven years going after Hillary Clinton have any grounds to complain?  Now that they are on record demanding that names of our classified sources and demand our methods be divulged, in the name of “sacred” transparency, can they now screech “Halt! Verboten!?

These are unanswered questions and much depends upon what does occur in the Special Counsel probe and in the other ongoing judicial proceedings in both state and federal courts.  We simply don’t know if the Democrats or the Republicans will feel politically justified to savage the opposition once Pelosi or some other unknown in blue, takes the gavel.

So many questions and so few answers.

Yet, tomorrow, we’ll try our best. Bayoubuzz will host a Facebook and Twitter LIVE video show to discuss these and other issues that are top of mind.  Joining the 4PM video conference will be Rannah Gray (political consultant and author), Jim Brown (host of a nationally-syndicated radio talk show, syndicated columnist and former Louisiana statewide elected official). Also opining will be retired Air Force Colonel Rob Maness who has just launched a weekly talk show on CRTV.

Those interested in watching either the live event (and participate by asking questions or commenting) or viewing the recorded video, can do so by visiting my Facebook Page and those of our aforementioned guests. The show will also be available on our respective twitter pages and on Bayoubuzz.com.

Above is a video promo. We hope you enjoy and are motivated to come armed to our video showdown with your questions and comments.

More in this category: « Michelle Obama goes low, Trump will never forgive CNN's Acosta, no media has constitutional right to press pass »
back to top