CNN's Acosta, no media has constitutional right to press pass 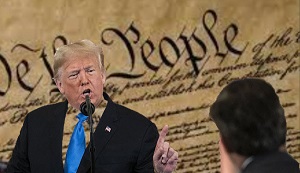 All Americans should embrace the First Amendment and our precious rights, including the freedom of the press. Clearly, the United States has a free press because 95% of the media are opposed to the President of the United States and there is no effort to prevent them from operating.

No U.S. President has ever faced a more hostile press than Donald Trump. Despite the intense opposition, he provides regular opportunities for the press to ask questions, such as last week’s White House news conference that spanned 87 minutes.

Unfortunately, some members of the press try to take advantage of their opportunity to ask questions. The press conference should work in an orderly manner with the reporters asking a question, the President answering it and the microphone being passed to another reporter.

In today’s anti-Trump media environment, reporters like April Ryan of American Urban Radio Networks stand up and shout questions without being asked. When the President refused to answer her question at last week’s press conference, some of his critics labeled it racism because Ms. Ryan is African-American. The charge is ridiculous because the President answered questions from other African-American reporters. In addition, the President must be the only person conducting the press conference. It must be the President, not April Ryan or another other reporter, determining who gets to ask questions.

An even worse example of bad behavior comes from reporters who ask multiple follow-up questions. At last week’s press conference, CNN White House Correspondent Jim Acosta asked several questions. When the President tried to move on to another reporter, Acosta refused to relinquish the microphone. This behavior was totally intolerable, and the White House was fully justified in revoking Acosta’s press pass.

Jim Acosta and CNN do not have a constitutional right to a White House press pass. There are thousands of news organizations and tens of thousands of reporters who do not have such a coveted pass. CNN claims that Acosta’s “First Amendment rights of freedom of the press” have been violated. If the court rules in Acosta’s favor than every reporter in America should be able to make a similar claim.

This action has caused an uproar in the press. CNN filed a lawsuit against President Trump and several members of his administration demanding that the press pass be restored. The lawsuit has been joined by many other news organizations including Fox News, who will be filing a “friend of the court” brief backing CNN.

These actions are not supported by famed Watergate reporter Bob Woodward. He argued that instead of a lawsuit, the remedy was “more serious reporting.” He said too many reporters have become “emotionally unhinged” by President Trump.

White House Press Secretary Sarah Sanders labeled the lawsuit “grandstanding.” She noted that CNN has almost 50 other reporters with White House press credentials. According to Sanders, “Mr. Acosta is no more or less special than any other media outlet or reporter with respect to the First Amendment.”

Of course, Sanders is correct. When a reporter acts like a child and refuses to relinquish the microphone at a press conference, he should not be allowed to come back to that type of setting. There are other reporters who have a right to be heard.

There should also be a modicum of respect shown toward the President. Acosta’s treatment of both the President and Sanders has been atrocious. He does not deserve a press pass. It is disgraceful enough for CNN to allow such bias and hatred on its airwaves, but the President and his Press Secretary have a right to prevent it from occurring during their news conferences.

More in this category: « If Democratic House probes Trump, who wins the war? Trump, "only I can fix it", feeling Blue Wave blues »
back to top