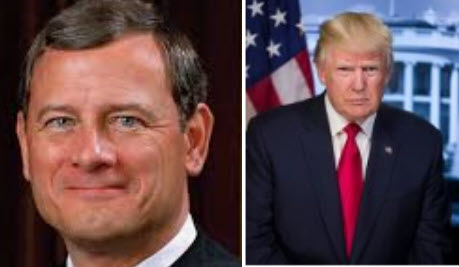 There are two Trump daily certainties.

First: What Trump says on Monday, he changes on Tuesday; What he claims in the morning, he asserts the opposite in the evening.

Second: He will be insulting somebody.

Why should today be any different?  If attacked, he will punch back regardless as to whom might be the foe or whom it might hurt,

On this Thanksgiving eve, the turkey in his target is no other than John Roberts, the US Supreme Court Chief Justice.

Today, Roberts gave a statement to the Associated Press, “"We do not have Obama judges or Trump judges, Bush judges or Clinton judges. What we have is an extraordinary group of dedicated judges doing their level best to do equal right to those appearing before them."

This rebuke by Roberts was in response to Trump’s claim that the 9th circuit was unfair and biased because they were appointed by Democrats. Trump had just lost a case over the issue of his executive order, the migrants and asylum.

You would think the last thing Trump would want would be to annoy another judge, particularly as he surrounds himself as a nationalist, and that only he could bring the country together, this Thanksgiving.

Would Trump let it go? Could he?

Instead, he has gone on a turkey trot tweet tear:

"Sorry Chief Justice John Roberts, but you do indeed have Obama judges, and they have a much different point of view than the people who are charged with the safety of our country. It would be great if the 9th Circuit was indeed an "independent judiciary," but if it is why… are so many opposing view (on Border and Safety) cases filed there, and why are a vast number of those cases overturned. Please study the numbers, they are shocking. We need protection and security - these rulings are making our country unsafe! Very dangerous and unwise!"

Following this tweet, the President issued this tweet congratulating himself: "Thank you to President Trump on the Border. No American President has ever done this before." Hector Garza, National Border Patrol Council.

"There are a lot of CRIMINALS in the Caravan. We will stop them. Catch and Detain! Judicial Activism, by people who know nothing about security and the safety of our citizens, is putting our country in great danger. Not good!"

Interestingly, earlier this year, Trump sang a different tune about a judge when he spoke glowingly of then-Judge Kavanagh. At that time, he said, “What matters is not a judge's political views but whether they can set aside those views to do what the law and Constitution require,"

Trump has not yet tweeted whether US Supreme Court justices picked by Republicans, including those chosen by him, can put their own political views aside.

With so many issues involving his own personal and political life (and perhaps even including that of his family) likely to be presented before the Chief Justice and the highest court of the land, that question of judicial bias will come up, one day, probably sooner, rather than later.

And his remarks, on this November day, might surely be remembered.

More in this category: « Paul Ryan gobbles up 2018 Turkey of the Year Award honors Merry Black Monday from General Motors, but Trump, it's Mueller Time »
back to top