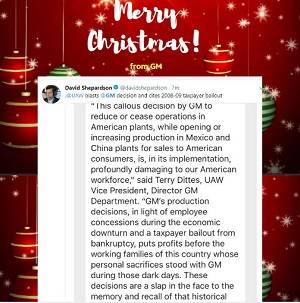 With the holiday season in the air, it’s “ Merry Black Monday” for many in the auto industry, specifically, some workers at General Motors.

The automobile giant who received a major bailout a decade ago announced major closings today and obviously, there are some very unhappy people.

Here’s how the news is playing out on twitter

So far, none of the Louisiana US Senators or Congressmen have commented. Nor has President Donald Trump. However, he has tweeted about other matters, top of mind, Special Counsel, Robert Mueller..

When Mueller does his final report, will he be covering all of his conflicts of interest in a preamble, will he be recommending action on all of the crimes of many kinds from those “on the other side”(whatever happened to Podesta?), and will he be putting in statements from.....

....hundreds of people closely involved with my campaign who never met, saw or spoke to a Russian during this period? So many campaign workers, people inside from the beginning, ask me why they have not been called (they want to be). There was NO Collusion & Mueller knows it!

As someone who spent 23 years working in the auto industry in Oshawa, I am absolutely gutted for all my former co-workers and friends/family who will be affected by this GM plant closure. So many tough moments in the industry since '08 but always thought GM would be in Oshawa.

Kodak moment for the auto industry is here! Sad but was inevitable. Other legacy manufacturers need to take notice! #electricvehicles #cleantech #autonomouscars

Layoffs are horrible for the factory workers, but great for stock prices. GM stock is up more than 7% to 38.52 at the moment. That's a 3 mo. high. pic.twitter.com/1ZVCmMQvGe

.@RepTimRyan (D-Ohio) calls closure of GM Lordstown plant in his district "a new Black Monday in the Mahoning Valley." More than 1600 employees laid off pic.twitter.com/NmfuhZP2RL

This callous decision by GM to reduce or cease operations in U.S. plants, while opening or increasing production in MX and Chinap plants for sales to American consumers, is, in its implementation, profoundly damaging to our American workforce -Terry Dittes, @UAW VP, Dir. GM Dept https://t.co/5aeHhgKgmB