Dr. Jerome Corsi won't "collude" with Mueller to "get" Trump 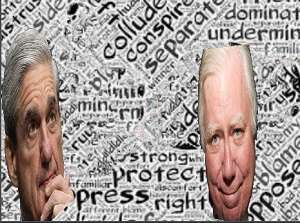 The investigative reporter and best-selling author, Dr. Jerome Corsi, is facing the heat from Special Counsel Robert Mueller and his team of attorneys. After two months of negotiations, Corsi announced that he is rejecting their plea deal and will be filing a criminal complaint with the Attorney General. Corsi is accusing Mueller’s office of “Gestapo” tactics as they tried to pressure him into pleading guilty to a single perjury count.

Corsi said he will not “sign a lie” and would “rather sit in prison and rot for as long as these thugs want me to.” After receiving his subpoena in August, Corsi cooperated with prosecutors by giving them access to his emails and social media and turning over his computers and cell phone.

Eventually, Corsi claimed that the talks had “blown up” and that he expected to be indicted. He refuses to sign the deal because he asserts that he did not intentionally lie to Mueller’s team.

The real question is how does this relate to President Trump and Russian collusion? Does the Special Counsel believe that candidate Donald Trump was directing Russians to access the Podesta emails and provide them to WikiLeaks? Dr. Corsi has only a peripheral relationship to President Trump, so this potential charge seems to be another “fishing expedition” of the Special Counsel’s office.

In several interviews, Corsi described Mueller’s very aggressive methods. According to Corsi it was like “being interrogated as a POW during the Korean War.” After reportedly catching Corsi in various lies, prosecutors want to charge him with perjury. However, Corsi claims the real problems involved his faulty memory of certain events and his refusal “to give them what they wanted.” What did they want? Clearly prosecutors were hoping Corsi would confirm the existence of a relationship with WikiLeaks founder Julian Assange.

After more than 18 months, the Mueller investigation continues. It has moved from investigating Russian collusion to obstruction of justice and other issues. While various people associated with President Trump have been charged, their alleged crimes either occurred well before the 2016 presidential campaign or had nothing to do with the issue of Russian collusion.

While those in the Trump orbit are being ruthlessly investigated, Hillary Clinton and her cronies are receiving a free pass. Mueller’s’ double standard is breathtaking, but it should be a surprise to no one. He is a creature of the “Deep State” and is not interested in investigating an establishment candidate like Clinton.

The real goal of this investigation is to damage Trump politically, possibly resulting in his impeachment, and discourage any future independent, “America First” candidates from running for President of the United States.