Is Mueller getting closer or more treasonous? Trump turkey talk 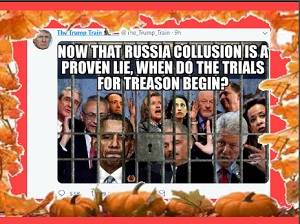 Is the long dark mystery coming to an end?  Are we at long last getting details whether Trump campaign conspired with the Russians or their agents during the 2016 presidential elections?

is this why the President, with tear gas on the border, healthcare in confusion, Ukraine and Russia in a staredown, is blasting out an image of Bob Mueller and Rob Rosenstein and a gang of others being locked up for treason?

I ask these questions with some sorrow. Darn! Tomorrow is not Thanksgiving. That was last week. Just imagine how the Thanksgiving table would react if we finally got to some of the really meaty stuff dividing our families for the past two years. Just imagine the powerful Trump-memes we could share!

Then, bringing up the subject would not be easy. At my Thanksgiving dinner, I was told, don’t dare talk politics. In other words, I had to go “cold turkey” about anything Trump.  Like other families, politics, especially Trump politics, is verboten topic number one as we’re passing around the bird and gravy.

Back home, as difficult as it was, we made it through the entire meal without a single word about the President, Robert Mueller, Ivanka, Jared, Melania, Don Jr., Eric or any of the members of the royal family.

Boy, was that hard to do.

So, what’s happening in the Fake news that might cause holiday indigestion? Here is a recap of some of the revelations that we know, or think we know, about the special counsel Mueller investigation or otherwise known as the “witch hunt”.

The Manafort legal team reportedly has been discussing details about what Mueller knows or might know with those who absolutely want to know, “Rudy and friends”.  Apparently, rumor is--there have been Manafort lawyer to Trump lawyer discussions that were valuable in helping the President answer the questions the special counsel sent to Potus.  Some might feel that sharing legal tidbit is “cool”, no sorry.  Others believe, doing so is akin to witness tampering and obstruction at worse and “shop talk” at best. Regardless, this is not a topic you want to discuss over cranberry and stuffing if you want to avoid food fights.

Earlier Monday we also learned that Jerome Corsi, decided to cut bait and swim on his own. No deal with the special counsel.  Some pro-Trumpers exclaimed on Facebook that this and the Manafort revelations were pieces of evidence that the Mueller’s “conflicted” investigation was imploding. Perhaps.

Except, yesterday, we learned that Corsi and Trump trickster (who worked for Richard Nixon, I might add), Roger Stone, apparently had discussed via email the need to get the “holy grail” from Wikileaks. It appears they just might have sought those purloined digital hand grenades that ultimately blew up the Clinton campaign in the last days of the contest.  If one were to believe those media reports, this email chain points to Stone knowing details about the planned release of the Podesta and DNC emails. It also points to his efforts to immediately get them out to the public to offset the anticipated time bomb from the “grab by the p#@#$%@y” Billy Bush tape which the Trump campaign knew was coming.

“No big deal” some of my former close friends appear to be saying on social media. Who cares?

Well, somebody seems to care. The President’s attorney released a statement that Trump has no recollection whether he discussed Wikileaks with Stone or Corsi.

Let this sink in.

The man who claims to have one of the world’s best memories does not recall if he talked with Corsi or Stone about Wikileaks?

Perhaps, despite his self-promotions, his memory is not so good after all. Good thing he still has the “best words” or I would be losing faith.

Memory lapses seem to be his family trait. Don Jr. does not recall discussing the Trump Tower meeting with daddy.

Funny how the most powerful man in the United States, one with the best brain and best memory, who knows more than the Generals, whose gut knows more than experts’ brains, can’t recall whether one of the most important events in the campaign even occurred?

But again, some folks on social media are claiming--who cares? Instead, what matters to some of them is retweeting the latest Trump presidential message that former intelligence officers, Directors of the FBI, Attorney Generals, a Secretary of State and former Presidents should be locked up.

And why should they care? Apparently, they're in good company. Don't forget, the GOP House Intelligence Committee did not want to probe junior about that private number phone call he made shortly after confirming the now infamous Powwow with the Russian attorney.

So, where will all of these recent revelations lead? Don’t know. None of us do.  For now, it is all speculation.

The kind of speculation, I would love to do if Thanksgiving were tomorrow.

I’d even risk being banished from the table just to take a jab airing this one out over pumpkin pie.