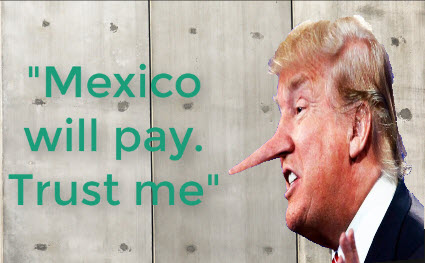 So often, I hear my pro-Trump defenders claim the media hates him, they are evil, fake newsers and enemies of the people.

I try to tell them that yes, the media is biased against Trump, but for good reasons. He lies or exaggerates so often that the media is simply challenging his or his administration comments, to get the facts.

That’s what they do.  That's their job. It is also human nature. When you know that someone is not being honest, you make extra efforts to get to the truth.

When discussing Trump and the truth, sometimes I get a response “Trump doesn’t lie”. I normally am flabbergasted when they say that.

Or, there’s the, “well, they all lie”, as if he should be given some type of pass for spreading false information because other politicians have done so and are doing so.

So, I am not here to defend Obama for breaking a promise, at best or lying at worse. Nor do I disagree that politicians lie. Of course, so many seem to do so. Occasionally.

But I have never seen the magnitude, the frequency, the intensity of the lies, false statements, exaggerations, misleading claims from anybody as I do see and hear daily coming from Trump and his administration.

Yesterday was a great example.

He said that he had never said that Mexico would pay for the wall in lump sum.

Forgive me, but, I don’t ever recall him saying that Mexico was going to reimburse the United States after we pay for the wall. I never heard him say that Mexico would not pay in lump sums.

What he did say, however, is below, and I will turn in over to FAKE NEWS, the “enemy of the people”, CNN:

But in April 2016, Trump's campaign outlined the steps he would take to compel Mexico to pay the US "$5-10 billion" to fund a border wall -- a plan that relies largely on threatening to bar undocumented Mexican immigrants in the United States from wiring money to relatives in Mexico.

"It's an easy decision for Mexico: make a one-time payment of $5-10 billion to ensure that $24 billion continues to flow into their country year after year," the memo said.

Or these from Politifact, another of the people’s enemies, I suppose:

We found several instances over the last few years, and in campaign materialscontradicting the president’s statement.

In an April 2016 memo, Trump’s campaign outlined the steps he could take to get Mexico to pay for the wall.

"It's an easy decision for Mexico: make a one-time payment of $5-10 billion to ensure that $24 billion continues to flow into their country year after year," the memo said.

Trump proposed measures to compel Mexico to pay for the wall, such as cutting off remittances sent from undocumented Mexicans in the U.S. via wire transfers.

Then, the memo says, if and when the Mexican government protested, they would be told to pay a lump sum "to the United States to pay for the wall, the Trump Administration will not promulgate the final rule, and the regulation will not go into effect." The plan lists a few other methods if that didn’t work, like the trade deficit, canceling Mexican visas or increasing visa fees. (Experts have told us there isn’t a connection between the U.S.-Mexico trade deficit and finding money for a wall.)

Trump has amended his "Mexico will pay" pledge many times, though this is the first day we’ve heard him deny that he once called for a large check.

The earliest mention we could find of him pitching a Mexico-funded wall came during a visit to New Hampshire in April 2015 (hat-tip Washington Post). He said he would "take it out" of the trade deficit: "I will take it from out of just a small fraction of the money they’ve been screwing us for over the last number of years."

Then he outlined the lump-sum-in-exchange-for-allowing-remittances idea. As president, he has also thrown out "reimbursement/other," the trade deficit and a "solar wall" that would cut down on Mexico’s bill.

More recently, including during his border trip, Trump says the United States-Mexico-Canada Agreement (USCMA) trade deal will result in Mexico "indirectly" paying for the wall. That argument is also faulty: The deal has not been ratified by each country’s legislature, it lacks new tariffs on Mexican goods coming into the country, and the benefits would go to private businesses.

We’ve compiled a number of his mentions here:

"I would build a great wall, and nobody builds walls better than me, believe me, and I’ll build them very inexpensively, I will build a great, great wall on our southern border. And I will have Mexico pay for that wall. Mark my words." - Trump presidential announcement speech, June 16, 2015

"Ultimately, it'll come out of what's happening with Mexico. We're going to be starting those negotiations relatively soon. And we will be in a form reimbursed by Mexico, which I've always said." - ABC News interview with David Muir, Jan. 25, 2017

"Well, we're working on a tax reform bill that will reduce our trade deficits, increase American exports and will generate revenue from Mexico that will pay for the wall if we decide to go that route." - Republican retreat in Philadelphia, Jan. 26, 2017

"Eventually, but at a later date so we can get started early, Mexico will be paying, in some form, for the badly needed border wall." - Trump tweet, April 23, 2017

"We're talking about the southern border, lots of sun, lots of heat. We're thinking about building the wall as a solar wall so it creates energy and pays for itself. And this way, Mexico will have to pay much less money." - Trump rally in Cedar Rapids, Iowa, June 21, 2017

"With Mexico being one of the highest crime Nations in the world, we must have THE WALL. Mexico will pay for it through reimbursement/other." -  Trump tweet, Aug. 27, 2017

"I often stated, ‘One way or the other, Mexico is going to pay for the Wall.’ This has never changed. Our new deal with Mexico (and Canada), the USMCA, is so much better than the old, very costly & anti-USA NAFTA deal, that just by the money we save, MEXICO IS PAYING FOR THE WALL!" - Trump tweet, Dec. 13, 2018

Friends, I know many of you will scoff at the almost 8000 lies that one fact checker has cited.

The Washington Post, as of December 21, said the number was 7,645 false or misleading claims.

When I’ve tried to share this and other similar fact-checking links with others, I get no response. Or, they rebut with "Fake News". Regardless, they won't look at the articles. Never.

The main problem with these lies, exaggerations, false claims, misleading statements or whatever one wants to call it, they undermine the credibility of his policies. I try to believe what he says only to be disappointed time and time again.

Trump has no wall separating truth from fiction.

This is the core of America’s real national emergency. He simply cannot be believed.