In early morning jackboot raid, was FBI after a Stone-cold terrorist? 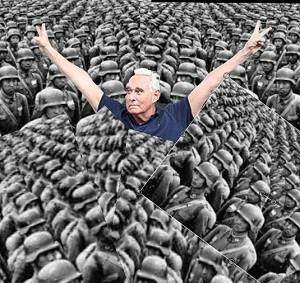 It sounded like it came out of a movie plot.  In the early morning hours, federal agents stormed a home to make an arrest.  They had to be after some major drug lord or a sought-after terrorist. There were 29 agents all wearing military gear and carrying weapons.  High powered assault rifles were involved. Seventeen SUVs and two armored vehicles surrounded the home with lights flashing and sirens blaring.  It must be a really dangerous dude.

In a nearby canal, amphibious watercraft charged the home filled with more federal agents.  A helicopter hovered in the sky with long range weapons focused on the home. As agents approached the house with battering rams, they demanded that the accused immediately open the door and surrender.  The attack on Osama Bid Laden had fewer Navy Seals involved then the number of agents who were sent to arrest this dangerous villain. Was this the seizure of an anti-government leader in Venezuela? Had El Chapo escaped from prison and his capture was about to take place?  Had the feds found Bin Laden’s successor? CNN had been tipped off and broadcast the whole attack live. What was going on?

lt was none of these, but merely a longtime Trump friend Roger Stone.  He was being arrested for making false statements to a congressional committee.  And he was treated like a terrorist? Stone is an American citizen and has lived in south Florida for a number of years.  He does not have a current passport. He has known about this investigation for months, and his lawyers said he would be glad to self-surrender if he were charged with a crime. If Stone had documents to hide or destroy, he would have had plenty of time in the months preceding his arrest. He has never been accused of any crimes and has no violent history.

After his arrest, the judge let Stone out on his personal signature without having to put up any property or money.   It was obvious that Stone was no threat and should have been allowed to appear on his own. So what gives? Have we been turned into a jackboot democracy?

Here was Stone’s response.  “They could simply have called my lawyers and I would have turned my myself in. I’m 66 years old. I don’t own a firearm. I have no previous criminal record. My passport has expired. The special counsel’s office is well aware of the fact that I’m represented. I was frog-marched out the front door barefooted and shackled.  It’s an attempt to poison the jury pool. These are Gestapo tactics.”

Some in the press speculated that the special prosecutor and the FBI were sending a message. They sure were. It’s a message of terror, and fear that no citizen can trust their government. It’s a message that your government is not above using police state tactics, and that the justice system responds, not based on evidence, but based on threats. When thugs come into intimidate, it sends a message that you may not be living in a democracy anymore but a banana republic. It sends a message that no, you are no longer considered innocent until proven guilty in a system that operates in such a dictatorial fashion.

The story gets worse.  Stone’s indictment accuses him of making false statements to the House Intelligence Committee, but the testimony is classified so Stone is prohibited from seeing what he supposedly lied about. How is he supposed to defend himself if he cannot even read what he supposedly said?  What has happened to the supposed constitutional guarantee of being able to confront your accuser and challenging their evidence?

It matters not whether you are a liberal or a staunch conservative, this is not how justice is supposed to operate in America.  Many Americans will feel that if it is not happening to them then why should they care. But unfortunately, what happened to Roger Stone could happen to anyone.  Are we not a better country than this?