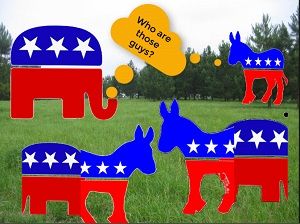 The Democratic Party has gone so far as to call itself “The Resistance” as if they are fighting some deadly ideological war where no quarter can be given.  Compromise is out of the question and legitimate debate beyond reach. They perceive themselves as an anointed force for good dedicated to frustrating the unenlightened will of the people as expressed in the 2016 election.

The new Democratic House has promised to spend America’s valuable time investigating this President.  They intend to dig into every aspect of his past life in the hopes of finding something… anything… they can use as a pretense for impeachment.  (We are supposed to forget their exoneration of Bill Clinton for proven Obstruction of Justice and Perjury in the Paula Jones Case while President, both felonies for which he was disbarred.)

There is a difference between prosecution and persecution.  In prosecution you investigate a crime seeking to find the person responsible.  In the persecution you investigate a person until you either discover something you can charge them with or destroy them through the process itself.  The first is a legal process, the other is a witch hunt. Democrats have publicly announced a determination to do the latter as a part of their “Resistance.”  This undermines the American system of law.

What is the difference between placing a victim on the rack, driving bamboo under fingernails, or imposing other cruel methods of punishment to elicit a confession and the more modern process of imprisonment until someone cooperates with prosecutors as a witness against another person?   How is this even legal?

Certainly, this mania does not define the entire party, but it does define the leadership and a significant extreme leftist faction that imposes obedience on its members.

As for the Republicans, what can you say?  They controlled the House, Senate, and Presidency and achieved little.  Why? Because an extreme rightest wing in that party refused to compromise.  Their small number prevented any majority votes from passing meaningful legislation because no Democrat would cross the aisle. The border issue should have been accomplished two years ago. Much the same for healthcare and an assortment of other pressing concerns.

In both parties the middle, where most of the American people reside, has been forgotten or driven into silence.  They are told how to vote and what to say through talking points by the political wackos that infect the process on both sides.

This must end.  We need thoughtful independent minded people of both parties to cast the leadership aside and serve the needs and wants of the American people.  It takes courage to do what is right and one has to believe that there are some in Congress who possesses sufficient bravery to cross the aisle, reach out to the other side, and forge compromise.

The balance of power this could generate would take power away from the respective party extremes and place it back in the hands of thoughtful elected representatives.  This group, however small, would control debate and passage of bills.

Consider the power a third faction could possess. They would possess the balance of power.   Nothing could pass unless they approved of it. Everything too conservative or too liberal would die in committee or on the floor of Congress.   Eventually, the leadership of both parties would realize that their ambitions are stymied by the demands of America’s common men and women who have tired of the foolishness, incompetency, corruption and “Resistance.”.  Reason could prevail and political normalcy returned.

Are there no members of Congress willing to fulfil their oath of office, uphold the constitution, and serve the American people?    It would be so simple to achieve. It just takes a little courage and fortitude coupled with the desire to do what is right for our nation.

This is, after all, why they were elected, is it not?

Ron Chapman is an award-winning columnist, a businessman and a professor.