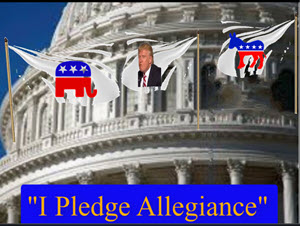 The Republican and the Democratic parties at the highest levels are more beholden to their political colors than those joining all Americans. This has been most evident during our Congressional hearings over the past two years during the Strzok testimony, the Supreme court proceedings and the Republican attempts to protect the president yesterday.

It does not take a juris doctorate to know that the House Republicans absolutely shut down any possible oversight of the administration over the past two years. The man in charge of House intel, Devin Nunes was a midnight rider to the White House after being on the Trump transition. His goal was to disrupt the Mueller investigation, not ensure that the country was secure from outside interference.

As each day goes by, it is becoming ever so obvious to me that the man sitting in the oval office got there thanks to the Russians, Putin and his own duplicitous cover-ups. He is president because he and his campaign did not heed the warnings of the FBI that the Russians had an interest in influencing the elections.  Instead, when the Russians came calling, his team did not call the FBI. Instead, they said “great. I love it”

Apparently, the Republicans in the House took marching orders in the Cohen hearings.  Only one congressman seemed to have a single interest in facts. Their mission was to destroy, defame and distort.

We all know that Michael Cohen is a swine. He failed to squarely admit that it was his personal behaviors that got him into serious criminal jeopardy, instead, he blamed his own weakness upon his mindless obedience to his client, Donald Trump. Cohen said he is not a liar but all of his actions told us otherwise and is now getting ready to do time in large part due to his own greed and evil actions.

Yet, the Republicans can’t have it both ways. They can’t claim that Cohen has no credibility yet push his admissions that they like. Either he has no cred or he does not.  Indeed, Cohen is a liar, he did not just lie once. But he could tell the truth and yesterday, at least in my eyes, he did.  Moreso, they cannot condemn Cohen’s lying yet ignore the thousands of distortions, lies and false statements this president has uttered since running for political office.   How any of them could call Cohen a liar and not admit the same for the head of their party is defacto dishonesty and hypocrisy.  All too often, during discussions in person or online, on TV or in print, I watch and read their responses to charges of Trump lies that it does not matter, they like what he has to say. They like his policies.

They would know that if a Michael Cohen is convicted for actions of fraud and lying and the President calls him a rat, they would expect the same for a Paul Manafort and a Roger Stone. They would know that dangling a pardon for those who don’t speak is clear evidence of obstruction, either criminal or otherwise.

They would know that a President who condemns prosecutors “flipping” to get a higher fish and defends his former campaign manager over the law enforcers seeking justice, is an aggravated assault upon our own judicial system. They would know that it is as important to defend the rule of law to preserve our elections as it is to remove illegal immigrants who have entered our borders, including those who unwillingly entered as minors because their parents would not wait in line.

The Republican party of Donald Trump is consumed by the far reaches of the political edges.  The extremes were overwhelmingly embarrassed and defeated in our last elections. The president and his yes men and women did not get the message.

They tell me campaign financing law-breaking is no biggie, that laundering money to pay hush money is the manly thing to do. They tell me, “so what, Hillary is worst” and that “Democrats are evil”. They tell me that we should not have a hearing because the president is meeting with a foreign despot, elevating him on the world stage.

Unfortunately, they are not alone in blinding the truth.  Democrats have ignored the possibilities that the FBI and the DOJ acted in ways that undermine their own credibility’s. They need to be concerned and ask questions.  If not, the President and loyalists will always feel cheated and unheard.

More than anything else, it is so obvious that America is at a serious crossroad.  In my view, this President is not worthy of the generous loyalty the party bestows upon him. The GOP are the willing victims. He has corrupted them. He has lied to them. He has told them that it was “cool” to try to build a tower in the land of our mortal competitor without telling voters of his actions.  Instead of being concerned about the impact of split loyalties, he has claimed that it would be unfair to HIM to lose out, if he were to lose the election.

In short, he has no business being the commander in chief since he cannot command the unique chief responsibility he must demand as the leader of the free world—living the life of justice and righteousness, whatever the costs

Most, unfortunately, his number one mission is to protect against Congressional and judicial intrusions upon his own personal freedoms and that of his family.  As a result, he is the worst of American selfishness. The world is about him, nothing more. Nothing else really matters.

What is happening to our country?

I don’t know. But if we don’t start putting nation over party, we will consume ourselves from within.