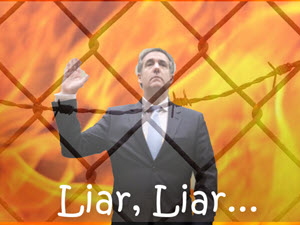 The hearing was another carefully orchestrated piece of the Democratic Party’s unrelenting campaign to destroy President Trump. In fact, the hearing was completely staged to elicit the right message from Cohen. It was revealed that he spent 10 hours over the course of four meetings with staffers of the House Intelligence Committee, chaired by U.S. Representative Adam Schiff (D-CA). Thus, the real collusion was with Democrats, not with Russia.

This revelation leads to serious questions whether the Democrats engaged in witness tampering. Yet, despite the coaching, Cohen did not lay a glove on President Trump during his seven hours of public testimony. While he did engage in hyperbolic personal attacks calling the President a “racist” and a “con man,” he admitted that he was not aware of any “Russian collusion.” He also may have lied multiple times. During his testimony before the House Committee on Oversight Reform, Cohen claimed that he never sought a position in the Trump White House. This statement was refuted by Lynne Patton, an official with the Department of Housing and Urban Development, and a former board member of the Eric Trump Foundation. She said that Cohen “told me personally that he wanted to work at the White House.”

Cohen also claimed that he never asked the President for a pardon. This has now been debunked by his own attorney Lanny Davis, who told The Wall Street Journal that Cohen “directed his attorney to explore possibilities of a pardon at one point with Trump lawyer Rudy Giuliani as well as other lawyers advising President Trump.”

It should surprise no one that a man who was disbarred and sentenced to prison for three years for lying to Congress, bank fraud, tax evasion and illegal campaign contributions has now been exposed as a liar once again. What a shock, Michael Cohen is a charlatan! Democrats don’t care about the obvious problems with his credibility and truthfulness, they were just happy to publicize another round of Trump bashing before the national television cameras.

Once again Democrats failed in this campaign to destroy Donald Trump. It was impossible for the President to resist tweeting “Bad lawyer and fraudster Michael Cohen said under sworn testimony that he never asked for a Pardon. His lawyers totally contradicted him. He lied! Additionally, he directly asked me for a pardon. I said NO. He lied again! He also badly wanted to work at the White House. He lied!”

Cohen’s lying record did not stop Democrats from scheduling him to testify before several committees and claiming his testimony would be extremely damaging to President Trump. In the end, the ones who were damaged the most were the Democrats, who have been exposed, once again, as stopping at nothing in their obsession to destroy Donald Trump. Interestingly, while President Trump is still standing, the Democrats seem to be doing a pretty good job of destroying themselves.