Beto is ready for Romper room, not Oval Office 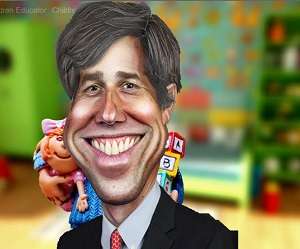 The Democrats now have their rock star in the ever growing presidential race. On Thursday, Robert Francis “Beto” O’Rourke officially launched his bid for the presidency. Beto is hoping to capitalize on the excitement that surrounded his losing U.S. Senate race last year in Texas. Despite a massive haul of $80 million, O’Rourke lost the race to incumbent U.S. Senator Ted Cruz (R-TX).

In other words, if Americans do not elect Beto as their next President, the world may self-destruct. Clearly, this candidate is a total clown. His political experience is minimal, consisting of six years on the El Paso City Council and six years as a United States Representative. While in Congress, O’Rourke’s legislative accomplishments consisted of passing exactly one bill, naming a local courthouse.

When House Speaker Nancy Pelosi was asked about O’Rourke’s record in Congress, she fumbled for an answer, eventually praising his “vitality.” She also said that he was a “real champion for the environment,” although she could not list any specific legislation he supported.

Beto is like a mirage or a dream concocted by Hollywood liberals looking for the next John F. Kennedy or Barack Obama. According to his supporters, Beto is good looking, intelligent and charismatic; however, even his admirers must admit that he surely lacks gravitas.

How can a presidential candidate who skateboards onto a stage be taken seriously? Presumably, Beto believed that live streaming his recent teeth cleaning procedure was a smart thing to do to connect to millennial voters, but, in actuality, it just made him look ridiculous.

Would Ronald Reagan bring cameras into the dentist’s office? Of course not, remember this was the President who never removed his coat jacket in the Oval Office because he was so concerned about maintaining dignity and decorum in the White House. If elected President, Beto may erect a skateboard ramp in the Oval Office, so he can show off his skills to admiring reporters.

Beto is 46 years old, but he acts like he’s a teenager. He exudes little maturity or wisdom, only youthful exuberance.  His positions on the issues are vague. In fact, on his website after his launch, there was a link to donate money, but no information about his platform.

Voters do know that Beto is for the Green New Deal, the $93 trillion joke of a proposal that President Trump accurately referred to as a “high school term paper that got a low mark.” Also, O’Rourke made clear that he has questions about the relevancy of the U.S. Constitution. In an interview with The Washington Post, O’Rourke questioned whether the United States can “still be managed by the same principles that were set down 230 plus years ago?”

Well, Beto the answer to your question is a resounding “Yes!” Our U.S. Constitution is one of the main reasons that our country is a super power today. The genius of the Founding Fathers has been proven over and over again during our history. All Americans should thank God that U.S. Constitution has been our guiding document.

It might be a good idea for Beto to study it before bashing it. Clearly, he does not understand our system of government. In his announcement speech, he referred to our country as a “democracy.” As any student of history should know, when Benjamin Franklin was leaving the Constitutional Convention, he was approached by a group of people, who asked him about the type of government that had been created by the delegates. He said, “a republic if you can keep it.” We do not have a democracy as certain inalienable rights are guaranteed by our U.S. Constitution and cannot be infringed.

Beto needs to study, mature and learn more about the country he wants to represent. Obviously, with his infantile behavior, his candidacy is tailor-made for the children’s hour or Romper Room; Beto is not ready for prime time.

More in this category: « Obama's DOJ colluded during Trump-Clinton race 2016? Biden will be "BUST" as Democratic Party presidential candidate »
back to top