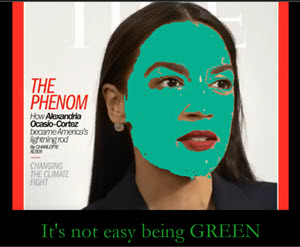 This plan is utter nonsense and while AOC is immature and inexperienced in national politics, she realizes that the Green New Deal has no chance of being implemented. The nation cannot afford a $93 trillion plan.

This week, the U.S. Senate voted 57-0 to reject her outlandish proposal.  Instead of voting against the plan, which most liberals realize is totally unworkable and laughably expensive, the Senate Democrats voted “present.” Nevertheless, four of the Democratic Party presidential candidates have embraced the Green New Deal, clearly showing AOC’s influence in the party and her popularity among the far left.

Her problem is that her constituents see her on national television, but not in their neighborhoods. In a Washington Times story, Rep. Ocasio-Cortez was criticized for building a national political profile, while ignoring the needs of her district. One constituent, waitress Barbara Nosel blasted AOC as “one of us…you worked in a bar, you are not a princess.” Lawyer Manual Fabian said, “People are billing her as a superstar. I think she doesn’t have enough experience.”

Of course, the voters in her district are completely correct. Certainly, Trump supporters realize that AOC’s agenda is ludicrous. The President touted the plan at his rally last night, boasting to the crowd that he can’t wait to run against it in 2020. At the rally, Donald Trump, Jr. noted that “every mainstream leading Democratic contender is taking the advice of a freshman congresswoman.” When the crowd started to chant, “AOC sucks,” Trump responded that “You guys, you’re not very nice…and neither is what that policy would do to this country.”

In a new Quinnipiac national poll, only 23% of voters gave AOC a favorable rating. According to the poll’s assistant director Tim Malloy, “All is definitely not A-OK for AOC. Most voters either don't like the firebrand freshman Congresswoman or don't know who she is.”

The good news is that as more voters get to know AOC, more will dislike the crazy policies that she is peddling. This political reality conveys something very reassuring about the basic wisdom of the American people.