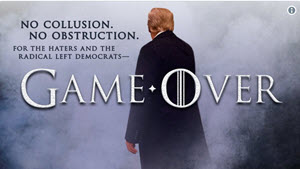 Few things have changed, since yesterday's Barr bizarre press conference or should I say, in my view, Trump's closing argument.

Like I said, little has changed, the noise has only gotten more shrill.

If that were possible.

Here are some tweets I have collected that I think presents the tone of the moment. Enjoy.

The explanation does not wash. https://t.co/TPDeTZSAdi

Sarah Sanders this AM on the lie she admitted to Mueller saying “countless” FBI agents thanked her for Trump firing Comey. “It was in the heat of moment, meaning that it wasn't a scripted talking point. I'm sorry that I wasn't a robot like the Democratic Party” talking collusion

Regardless of whether the obstructive acts described by Mueller was criminal or whether the litany of illicit contacts with Russia rose to the level of conspiracy, they're dishonest, unethical, and unpatriotic.

Mueller’s report is not a vindication of Trump, but a condemnation. pic.twitter.com/CoylgpYbvH

"Not only does she not have credibility, she lied. She out and out lied...the American people can’t trust her," says @AprilDRyan of Press Sec. Sarah Sanders.
"She should be let go. She should be fired, end of story...it’s fire me Thursday or fire me Good Friday. She needs to go." pic.twitter.com/M0whZiHg1l

Mueller assembled a devastating obstruction of justice case against Trump. That’s why Barr tried so hard to hide it from us.

To name a few:

The WH is "defined by a president who lies to the public and his own staff, then tries to get his aides to lie for him." https://t.co/DH35jlnmUP

And Mueller said it over and over: No collusion. Are seven examples enough? Here: https://t.co/53S2iFZzbB pic.twitter.com/T5b2eRDOD8