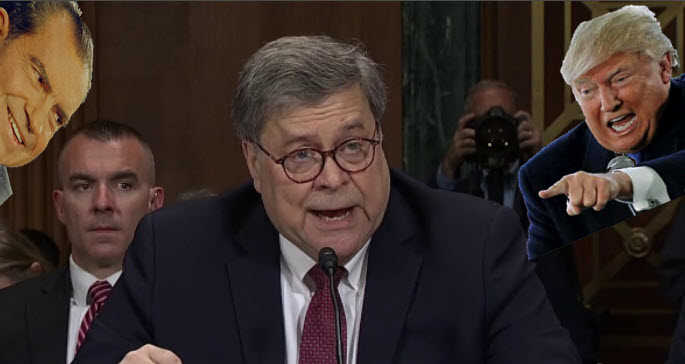 Almost fifty years ago, Richard Nixon left office in a cloud of scandal. A House Committee had determined he had engaged in impeachable offenses, not at all unlike those allegations made against our current White House occupant.

Had Bill Barr been the Attorney General yesterday and had Lindsey Graham and the same Republicans in the US Senate Judiciary Committee been in control of Congress back then, I have no doubt whatsoever, Nixon would have survived the ignominy of resigning.

Take a careful look at statements made yesterday by Barr:

“If the President is being falsely accused — and the evidence now suggests that the accusations against him were false — and he knew they were false, and he felt that this investigation was unfair, propelled by his political opponents, and was hampering his ability to govern, that is not a corrupt motive for replacing an independent counsel,” Barr testified.

“In this situation with the President who has constitutional authority to supervise proceedings, if, in fact, a proceeding was not well-founded, if it was a groundless proceeding, or based on false allegations, the President does not have to sit there constitutionally and allow it to run its course,” Barr said.

“The President could terminate that proceeding and it would not be a corrupt intent because he was being falsely accused,” Barr continued. “And he would be worried about the impact on his administration. That is important because most of the obstruction claims that are being made here, or episodes, do involve the exercise of the President’s constitutional authority and we now know that he was being falsely accused.”

What this means is this: A president has absolute power to terminate anyone, anywhere simply by claiming he is being falsely accused.

Barr has approved President Trump’s telling his  White House counsel to lie for him. The AG has approved Trump’s creation of false documents and records that involved his family’s activities and that camouflage his own prior activities,  Thanks to this AG, a president can now wave pardons for favorable testimony and intimidate those who are willing to testify against him or any member of his team.

Barr is stating that President Donald Trump could fire special counsels, terminate FBI Directors, and lie endlessly while calling any and all negative media, Fake News and the Enemy of the People.

What does this mean for the future?

The dozen or so investigations spun off from the Mueller probe are at absolute risk.  The president can state that the claims against him are false and of no foundation, are unfair, are motivated by politics, pushed by political opponents and hampers with his ability to govern. As a result of these claims, whether they are true or not, a president can end any and all investigations.

This power is stunning.  It is frightening. It is unAmerican.

Richard Nixon would have no reason to leave office.   He could destroy tapes (do a Clinton obliteration of hard drives), approve dirty political tricks, refuse subpoenas, create and enforce enemy lists,  deny them security clearances and engage in virtually any type of  punitive or obstructive behavior under the guise of being wrongfully charged. All a president needs to do is to claim he is the victim and his administration is being victimized.

For permission, all an attorney general would be required to do is to say there are no grounds for the investigation and that the president has been wrongfully accused.

But, let’s us not be deceived.  Look beyond the Trump, the Barr and the words from the Trump sycophants.

In the Mueller investigation, the special counsel determined he did not have sufficient evidence to charge a conspiracy. That is lightyears different than Barr’s assertion that “there is no evidence of collusion, which is what Trump and his AG are claiming.

Mueller specifically cited example after example of campaign officials and others meeting with Russians, lying about those meetings, attempting to obtain Russian-stolen emails, campaign manager providing internal polling to Putin-connected Russians. Mueller cited the republican candidate secretively engaged in trying to build the largest structure in Russia, needing Putin’s approval, at the same time denying that Russia had anything to do with intruding in our elections.  These acts occurred while the president denied having any business ties with Russia yet after one son specifically bragged about all the Russian money pouring into the Trump operation and the other son allegedly making the same claim to a reporter.

Mueller honestly felt there was not sufficient evidence to prove beyond a reasonable doubt that there was a violation of a federal law.  But, Mueller also also noted that he was being obstructed by witnesses hiding information, even by electronic means.  Moreover, the special counsel outright stated that the president’s responses to written questions were inadequate as roughly one-third stated that the man who said he had one of the world’s greatest memories, could not recall basic facts.

Again, and let me repeat--not having sufficient evidence does not translate into “false” or “inadequately grounded” as the AG stated under oath which allowed the Barr to assert that Trump had no criminal intent to obstruct.

However, his own FBI director and assistant attorney general stated and others have stated under oath that the investigation was not a witch hunt, therefore, by definition, could not be false, inadequately grounded

We are watching a masterful cover-up by the top enforcers of law in the nation.  Barr was able to claim he knew Trump’s state of mind without direct testimony.  But get this—when asked under oath about the president’s lies and deception, the attorney general responded Barr says he's just in the business of judging crimes. ... “I'm not in the business of determining when lies are told to the American people,”

So, what this man is telling us is this—the president could engage in act after act to disrupt in public and in private to demean and stop an investigation, lie to the American people in the process over and over, and those acts of deception do not go into the equation of criminal intent?

Is he kidding?  This line of reason turns the criminal justice system on its already fragile head.

What is our reality after yesterday? This attorney general, a man who secretively tried to get his written views to the White House about “no obstruction of justice” and the impropriety of the Mueller probe, systematically approved all obstructive behaviors by this president and by line of reason—all acts by future presidents in similar circumstances.  Barr has directly granted unfettered power to do whatever needs to be done to impede an investigation into him, even if it involves the intrusion of a foreign power interfering in our elections.

If one would even need further proof of the corrupt intent of this attorney general, consider what happened yesterday. When the discussion turned to the prospects of former White House Counsel Don McGahn testifying to Congress, Barr intervened without right or authority. President Trump granted Mueller access to McGahn.  Trump decided not to withhold the testimony in the Mueller report. Yet, Barr for some reason gave Trump cover by claiming, amazingly, that Trump did not waive executive privilege over McGahn.  Theoretically speaking, just maybe Barr would be right.  But why would the AG get involved in this particular fight? How would that affect his office of Attorney General?  At the minimum, Barr should have said nothing and if asked, respond with something like, “I’m not in the business of advising the president in this investigation”.  But that takes ethics, something that this attorney general obviously lacks, as evidenced by the very fact that he accepted this job knowing he had already formally decided the outcome of the most important legal matter in decades.

Never in my imagination would I believe that Nixon would have the last laugh by  a future attorney general granting post-facto permissions. Never would I fathom that a president’s power would be absolute as it relates to claims of impropriety against him and members of his staff.

The America I know and love died yesterday.  Attorney General Barr slammed an appaling hack-check on the balance of power.  And, Lindsey Graham in refusing to allow Robert Mueller to openly testify about his own views and the product of his own work, has become the pall bearer.

Weeks, if not months from now, when Trump pardons Manafort, Flynn and everyone else and run rough-shod over the US attorneys in New York and Virginia, we will see the horrors and dangers of this Barr blank check.

The president has gotten his Roy Cohn.

And, America has paying for the funeral.

More in this category: « 2020: Trump vs. Creepy Joe Biden and his mixed-nuts Democrats "Play Ball" time, Dems hope to send Trump to locker room »
Login to post comments
back to top