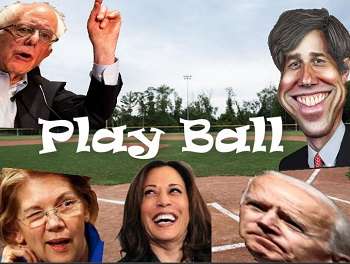 Biden seems to be laboring under the mistaken belief that Republicans over thirty will swing his way. Sorry, Joe, but that’s a bunch of malarkey. If Biden is nominated by the Democrats consider that Trump will re-play his incessant anti-Obama and Hillary tunes, probably to good effect. What Biden does have going for him, however, is that Democrats are willing to coalesce behind whatever candidate appears likely to have the best chance of beating Trump and that, more often than not, is the one who tops the polls at convention time.

Of the announced candidates, Elizabeth Warren has put forth the most economic thinking through her Robin Hood tax.  This works with the rich kicking in a couple of cents per pound of lucre which is an English concept originally aimed at financial transactions by banks that never gained much traction. However appealing Warren’s program appears, she was hurt last time by the colloquial claims of Indian ancestry that Trump lampooned when he called her Pocahontas. Though many liberal intellectuals favor Warren, they know, instinctively, she probably  can’t win.

Beto O’Rourke, ostensibly, has a claim to a high moral ground, and his appearances are laced with a folksy form of Jack Kennedy charisma. That being said, for all the youthful  TV allure, it is doubtful if Beto can withstand the withering fire of Trumpian full mania. Trump is a one-man wrecking crew who could demolish the Pyramids in an afternoon if he so chose. Beto is too nice, too honest, and scarcely hard enough to take on the Trumpian furies.

That brings us to Bernie. Sanders’ legions are still in place and will trudge, again, like postmen, through rain, sleet, and snow to spread the gospel. He’s, perhaps, the candidate the president should fear the most, especially since Trump lost the popular vote by three million last time, and there are four more years’ worth of youngsters newly enfranchised since 2016. Bernie’s love-ins, easily, compete with Trump’s tent-revivals, and he has an uncanny ability to call bullshit to great effect.

Bernie’s fortunes will depend, to a great degree, on who he selects as a V.P. In this regard he could do worse than opt for fellow candidate, and former CA Attorney General, Kamala Harris. A successful law and order type in a notoriously liberal state, she is a prosecutor-politician with the smarts of Arlen Specter and the jugular instinct of a crouching tiger. Trump, et Cie, would be her raw meat, leaving the president little respite.

With Bernie going crazy on the fallacies behind Trump’s manufactured, deficit-driven, prosperity, Harris would play the role of a circuit-riding judge dispensing harsh justice in the wild world of Trump’s deregulation, racial politics, Russia troubles, and the general  economic free-for-all that he credits with sustaining the boom begun under Obama. But, it’s only the 1st inning.

More in this category: « America justice dies, Nixon smiles as Barr does fealty to Trump Social media giants rip conservative speech through censorship »
back to top