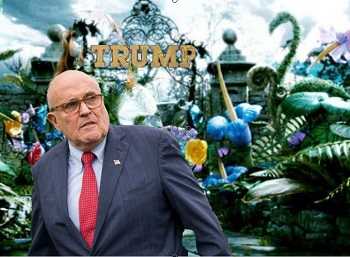 Today in the New York Times, we learn that Rudy Giuliani is on a mission as the attorney for Donald Trump.  In an assignment that borders on foreign policy, legal maneuvering, espionage and public relations, the President’s outside counsel is getting the nation and the world ready for Elections 2020, Trump-style.  York Times article is titled “Rudy Giuliani plans Ukraine trip to push for inquiries that could help Trump”.

Are you curiouser yet?

And this is how CNN explains it.

But Giuliani's story is littered with holes. According to a report from Bloomberg, the Ukrainian government's case against Burisma had been "dormant" since 2014, two years before Biden successfully pushed to remove the prosecutor general. Biden was also joined in his anti-corruption push against the prosecutor by numerous leaders in Europe as well as the International Monetary Fund -- none of whom had any family ties to Burisma.

That hasn't stopped Giuliani from publicly calling for the Department of Justice to start investigating Biden, something he says the President agrees with. "He has no particular interest in the Biden part of it," Giuliani said of Trump. "It's just something there that should be investigated."

But here are the facts, Laura.  Joe Biden was appointed the point man for Ukraine.  Two to three weeks later, his son, Hunter, who had just been tossed out of the military for testing positive for cocaine, was appointed to a position on the most corrupt agency, the most corrupt business in Ukraine, a natural gas business called Burisma, which was headed by an oligarch who was being protected by Putin in Russia.

And Biden's kid took down about $3 million or $4 million that we could count.  And Biden, when the kid got under investigation, actually says, quote, I strong-armed the president of the Ukraine to dismiss the prosecutor because the son of -- I will leave it out -- was corrupt.

What he left out of the explanation was that prosecutor was right on the tail of his son, looking for the money that appeared to have been laundered from Latvia to Croatia to America.  And when he tried to get the Croatian government to give the amount of money that Hunter Biden received, all of a sudden, the president of the Ukraine gets a call from the vice president of the United States, and he has told you are not going to get your $1.2 billion loan guarantee, which they needed then to prevent default, unless you dismiss the prosecutor.

So, here’s where I’m getting curiouser and more “mad”.  Let us assume that everything that Rudy has stated is true, I’m wondering if we’re not seeing exactly what he and his client, the president, have blasted the Obama administration, the DOJ, the FBI, Hillary Clinton and the Democratic of doing to help defeat and hurt Trump?

I am not stating that the fact situation is identical for it obviously is not.  I understand that Trump, as the president and others on his behalf, believe there is a justification to get to the truth. Nor am I claiming that facts should not come out. All facts should. But, in my own mind, something simply is not right. It all seems to be oozing with hypocrisy and inconsistency. After all, Obama and all those involved in the investigation of people related to Trump felt justified in protecting the country from outside interference although we will see if they broke any laws or federal rules in doing so.

To obtain more information to see if I am missing the point, this is what I posted on Facebook early this morning (forgive grammatical, spelling issues, please):

Help me to understand the legal and moral differences here, please and I do believe these facts are correct as reported:

The Trump administration is using the power of the federal government has dispatched Rudy Giuliani, the president’s lawyer, to pursue and maintain an investigation into the son’s perhaps unlawful activities (and possibly the former VP’s own actions) involvement with a foreign government, the Ukraine. On top of this, the president has said he would like AG Barr to investigate this and the AG seemed to suggest that the administration has talked to him about opening up an investigation of another person, which arguably, could be the Bidens.

Yet, Trump and others have accused the dems and Clinton of paying campaign money to a 3rd party who hired an investigator to get information about candidate Trump’s potential dealings with Russia that were not being disclosed by the candidate. Also, Trump and others are accusing the Obama administration of employing biased federal agents to investigate people associated with Trump’s 2916 campaign which investigation the current AG has stated he did not know if it was or was not justified.

Moreover, Trump backers have called it collusion when a democratic operative who worked for the Party allegedly met on her own with members of the Ukranian embassy to obtain potential Trump campaign dirt.

What are the differences? I am not saying there aren't but there sure seems to me to be similar in many ways.

I see. Thanks. That explains it all.

I’m no longer curiouser or mad.

More in this category: « Hillary Clinton's anti-Trump rage is gift that keeps on giving Bill de Blasio, the latest clown to enter Dem 2020 circus »
back to top