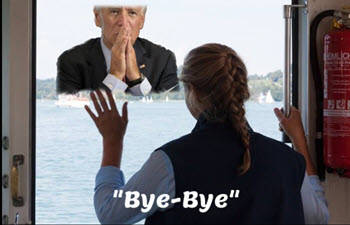 The problem with this analysis is that Joe Biden is a very flawed candidate. While he was elected to the United States Senate at the age of 29 and served for six terms, Biden has not done well as a national candidate. He ran for President twice, in 1988 and 2008, and bombed both times, receiving less than 1% of the vote.

Ironically, he left the 1988 race after plagiarizing speeches from British politician Neil Kinnock, but did not learn his lesson. In this campaign, portions of his official statement on climate change were plagiarized as well.

In his previous presidential races, voters were not very impressed with Biden. Today, voters should feel the same way toward a candidate with a history of making incredible gaffes. His propensity for cringe worthy comments was on display this week at a fundraiser in New York City.

He praised his ability to work with former segregationist Senators Herman Talmadge of Georgia and James Eastland of Mississippi. Biden said that Eastland called him “son,” and not “boy,” but noted that Talmadge was “one of the meanest guys I ever knew.” Despite their differences, Biden claimed that “At least there was some civility. We got things done. We didn’t agree on much of anything. We got things done. We got it finished. But today you look at the other side and you’re the enemy. Not the opposition, the enemy. We don’t talk to each other anymore.”

Instead of being applauded for his ability to work with others, Biden was blasted by his fellow Democratic presidential candidates. U.S. Senator Cory Booker (D-NJ) said he was “disappointed that he (Biden) hasn’t issued an immediate apology for the pain his words are dredging up for many Americans.” U.S. Senator Kamala Harris (D-CA) noted that “If those men had their way, I wouldn’t be in the United States Senate.”

As a 76-year old white male, with a lifetime in politics, Joe Biden is surprisingly out of touch with the Democratic Party today. It is hard to believe he did not realize that extolling his ability to work with segregationists would cause a firestorm of criticism.

The young progressives driving the Democratic Party today are not interested in a “pale, stale male” as their nominee. Despite his name recognition and lead in the polls, he will have a hard time withstanding the attacks which will come his way.

To get ready, Biden has been hurtling to the left on issues to try to appease the progressive base of the party. For example, he abandoned his four decade support of the Hyde amendment, which outlawed public funding of abortions. This was done after actress Alyssa Milano and others criticized him. He has also apologized for his support of the 1994 crime bill, which African American leaders blame for high incarceration rates across the country.

In the days ahead, he will continue to move to the left, apologize for previous statements and attempt to pacify his critics. It will not be enough to win the nomination. It has already been lost as the base voters of the Democratic Party have had enough of Joe Biden and they are not eager for more.  S