Women and America attacked by Trump, he's not my type 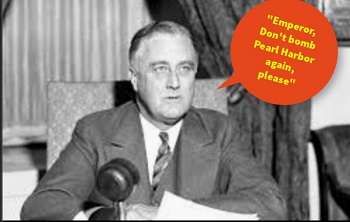 Suppose right in front of the world's eyes, Franklin D. Roosevelt joked with the Japanese emperor after Pearl Harbor saying, “Don’t bomb Pearl Harbor again, please”.   Or, how about hearing somebody who has allegedly raped your daughter jest, “she’s not my type”?

Would you be hurt? Upset? Angry? Outraged? Ballistics?

Our President, Donald Trump, has made two statements this week that should go into the history books for shocking, even for a nation who is now shocked-proof. The latest occured within the past 24 hours, Trump ridiculed America for being concerned about their elections by telling Putin in a mocking way, “Don’t meddle in our elections, please”.

Only eleven months ago, Trump stunned the world by claiming he believed Putin over his own intelligence. Putin claimed he favored Trump in the 2016 elections but did not interfere. Mountains of evidence exist to the contrary. Trump’s own hand-picked intelligence have testified that it was the Russians and Putin. A two-year report confirms those facts and warns it will happen again.

The first statement at issue occurred days ago. Last Friday, we met the weekend with some are jokingly calling another “bimbo eruption”, in reference to the similar scandals under Bill Clinton,. A highly-respected women advice columnist charged the president of an act that would be rape, if true.  Two professional and highly visable women support her allegations that she immediately told them about the incident. Is the incident from two decades ago true? Don’t know. Do I believe her? Well, Trump wants us to believe that all of the women who accused Bill Clinton are telling the truth. Yet, he insists that two dozen women who have pointed to him and his friends are being dishonest.

What are the odds that all of the Clinton women are truthful and all of the women he is attacking, are lying?

Pretty slim. Also, let’s not forget that he is a man who hid paying off two women so he could get elected President. Yet, after getting caught, he claimed knowing nothing about it.  Perhaps more hysterical is that he is claiming to have paid roughly three hundred thousand dollars to these two women combined while--yep, accusing THEM of lying.  Tell that to the feds. They have labeled him as an unindicted co-conspirator and his former attorney Michael Cohen, justifiably, does time.

Am I angry? Am I outraged?

Yes. But more than any of these feelings, I am very saddened and frightened that his political allies and ardent supporters consistently and predictably defend and protect him. They ignore the facts. They take his word as gospel (such as Lindsey Graham). Some even come to his defense.  The president on the world stage once again gave the Russian dictator cover, making fun of the well-documented, slam dunk evidence that Putin orchestrated the invasion of our nation and disrupted our democracy.

The silence screams out worldwide. .

The man who claims everybody else is a traitor has once again on the world stage insulted Americans. He has turned his back upon our democracy. He has turned his back on one-half of our country’s population. He has once again joked about allegations similar to those that put Bill Cosby in jail, willfully and repeatedly abusing women (Some of the allegations against Cosby occurred in the sixties, not twenty, but fifty years ago.    He once again is  telling brothers and fathers that it is ok that their sisters or daughters are called "liars". He again is approving slamming girls and women who reluctantly tell their horror stories, with ridicule.  According to Trump, based upon his own behavior, it is fine to assert that the accusers aren’t the right type.  Defending sexual assault and even worse by mocking the women victims and accusers is fair game.

On the international front, in crude terms, he is essentially sticking his middle finger at American voters (and our allies) who are concerned about Russian interference. The end result is his laughing at us all, symbolically messaging “so what, who cares”.

Yes, the silence is beholden. A shrug here, a chuckle there or just another counter-charge that those who protest are “Trump haters”  .

Trump’s statements matter. His loyalists protections do to.

These are sad and frightening times.

These are moments that, indeed, will live in infamy.

More in this category: « Kamala Harris burnt Biden, showed she can torch Trump Carter has Russian fever delusions--claims Trump did not win election »
back to top