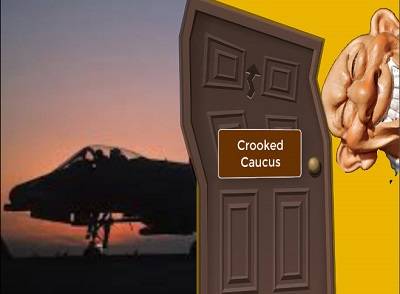 It was a vigorous debate that spanned three days as even Democratic Party leaders were uncertain of the result. Eventually, the House version of the NDAA passed, including $733 billion in defense spending, $17 billion less than the White House requested.

The bill also substantially alters the Air Force’s National Security Space Launch (NSSL) program by restructuring how contractors are selected. The goal of the program is to foster the private commercial development of domestic launch vehicles and end our country’s dependence on Russian RD-180 rockets.

Currently, the program allows the Air Force to select two private, domestic companies to divide an estimated 25 to 34 national security space launches from 2022 to 2026. There are four companies contending for the contracts: United Launch Alliance, SpaceX, Blue Origin and Northrup Grumman.

Under the House bill, more than two companies would be eligible to win bids and certain contractors would be favored. For example, SpaceX will be guaranteed a $500 million earmark at a minimum. These funds would only be available to companies like SpaceX that did not receive contract funding from Phase 1 of the NSSL.

President Trump declared his opposition to the change, which will weaken the competitive nature of the program. According to the Trump administration, if enacted, the House version of the NDAA will “increase mission risk for the nation’s national security requirements.”

It is imperative that President Trump continue his mission to drain the swamp and that politics not be allowed to enter the NSSL program.

The House version of the NDAA is opposed by the U.S. Senate, the Trump administration and the Air Force, which is determined to keep the program on schedule. Unfortunately, if enacted, these Democrat proposals will force a delay in the launches, harming our national security interests and forcing prolonged dependence on Russian RD-180 rockets.

The House mandated changes, located in Section 1601 of the NDAA, are quite extensive and costly. Not surprisingly, politics has played a role in the House legislation. The changes reflect a preference for SpaceX, even though the company’s CEO, Elon Musk, admitted to former Acting Defense Secretary Patrick Shanahan that the company was not selected in Phase 1 of the NSSL because it “had written a poor proposal” that “missed the mark.”

SpaceX is eligible to contend for Phase 2 contracts just like the other three companies competing. There should be no special deals or earmarks to boost one company at the expense of the American taxpayers.

Unfortunately, Smith and the Democrats are showing favoritism for SpaceX, possibly due to the celebrity status of Elon Musk. However, our national security should not be sacrificed in any way to benefit any well-known personalities or high-profile companies.

Another factor that may be influencing Chairman Smith’s position is that SpaceX is a major contributor to his campaign war chest. In the 2018 election cycle, SpaceX and individuals associated with the company donated over $15,000 to Smith. He was the top recipient of SpaceX contributions in the House of Representatives in the last campaign, making this special deal even more suspicious. It also smacks of the typical Washington D.C. “politics as usual” cronyism that the Trump administration has been battling since the very beginning.

For these expensive and critical launches, it is essential that politics be removed from the decision-making process. Instead of politicians dictating crucial national security decisions, the military professionals at the Air Force should be allowed to proceed in a manner that serves the best interests of our country.

Col. Robert Bongiovi, Director of the Launch Systems Enterprise Directorate at the Air Force Space and Missile Systems Center, criticized the new provisions demanded by Chairman Smith. He noted in a SpaceNews interview that if they are adopted and additional launch contractors are included, our space missions would be put “at risk because of the time and cost of integrating new providers.”

There is no solid reason to compromise national security to benefit one company. The stakes for our country are too high to allow cronyism and typical Washington D.C. politics to prevail. This is one of the many reasons why Donald Trump was elected President of the United States and why this issue is so important.