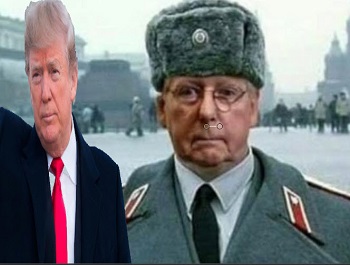 The FBI Director Christopher Wray recently said, ““The Russians are absolutely intent on trying to interfere with our elections”.

Robert Mueller testified, “ Russians are interfering 'as we sit here'”

According to the New York Times, Director of National Intelligence Dan Coats was highly frustrated and saw his warnings about threats posed by Russia “watered down by the White House”.

Our former Secretary of Homeland Security warned us that the President did not want to discuss Russian interference.

At the last meeting with Russian president Vladimir Putin, Trumphad the audacity to side with the Russian president and ridiculed the suggestion that Russia interfered with our elections just as when in Helsinki, he questioned his own intelligence last year in front of the entire world, giving Putin almost absolute cover.

Trump has frequently said he didn’t see any reason why he wouldn’t accept foreign dirt during the elections. Trump only weeks ago said he didn’t see why he would go to the FBI if a foreign source wanted to provide information to hurt his opponent. He then backed off of that statement and said he would look at the information first before contacting FBI, again, leaving open the question whether he would indeed contact the authorities.

News reports have claimed that Trump has Rudy Giuliani trying to convince the Ukraine President to open an investigation into Joe Biden, again, which net effect would be not only obtaining foreign information but  ge this--lobbying a foreign government at the very top, from its own head of government

Yesterday, Donald Trump when asked about his phone call with Putin and if he discussed Russian interference amazingly said, “You don’t really believe that do you”?

Let that sink in for a moment. Our president, in light of all of these warnings, with red lights flashing violently in the night, once again essentially denied Russian interference. The man who said he knew more than the Generals is now saying he know more than just about anybody and everybody.

You would think that somebody high up in the Republican hierchy would do something, wouldn’t you? I mean for the sake of patriotism, national security, apple pie, hot dogs, the American Flag, the Star Spangled Banner and the US Consisutition. Wouldn’t you?

No, Mitch McConnell, Republican Majority Leader, who is reported to have refused to help Obama warn the American voters about Russia’s involvement in 2016, is now, in 2018, walking lock-step with his wife’s boss, the President. Faced with assaults from international forces, Moscow Mitch is refusing  to put House-passed bills on the table for discussion and for vote. One of these bills requires a campaign to report foreign interference. McConnell says "NYET" to these efforts to stop the Russians and others. He claims the Democrats are being political and that this is the job for the states.

His argument essentially is akin to telling the state national guards to take on the invasions of hostile countries.  His refusal to act is opening the door to all governments who want to influence our elections and keeping that information from the FBI. Moscow Mitch wants the states to stop those acts we ordinarily would call collusion or worse, criminal conspiracy, not the feds.

Trump, who loves to call people unpatriotic and label anyone who opposes him as a traitor is clearly undermining our security. And Moscow Mitch is carrying the president’s vodka.  If i believed in conspiracies, I would almost accept our President actually wanting Putin's help again as he did in 2016 when he welcomed it with open arms. It's almost seems that his comrade, Moscow Mitch, will once again do nothing because it would help him stay in power.

What's goin on? Who knows. But, what I do know is this--the people in the power to make it stop are either denying its existence or refusing to put the matter up for discussion.

So, when will the Republican leaders tell our top government officials , “стоп”. STOP. ENOUGH!!

My bet is on NEVER.

More in this category: « EXTRA, EXTRA: Trump on incredible stretch of good news After El Paso and Dayton, Hollywood's "The Hunt" is deplorable »
back to top