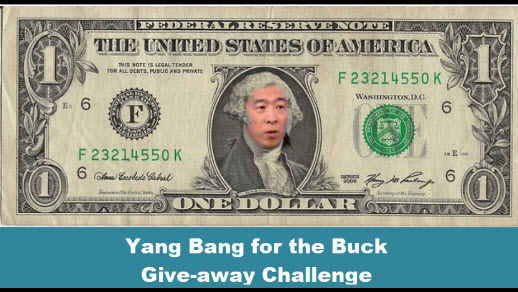 Last night, Yang took advantage of the opportunity by offering to pay ten lucky families $1,000 per month for a year. Curiously, Yang calls this giveaway a “freedom dividend.” The money will be funded by Yang’s campaign and his attorneys claim that it is legal to reward 10 random families.

Unfortunately, the real problem is not whether the payments are illegal, but that the “freedom dividend” giveaways are a disincentive for Americans to work and be productive. If Americans receive a continual stream of free benefits from the government, there is no incentive for them to support their families by becoming industrious and contributing to our private sector economy.

The Founding Fathers did not create a constitutional republic 243 years ago for our federal government to reward every American with $12,000 per year for doing nothing. This stunt is another in a long line of Democratic Party proposals that are an insult to the legacy of our Founding Fathers, who endured tremendous sacrifices to establish this “shining city on a hill.”

When our country was created, it would have been an insane idea for any Founding Father to advocate that it is the responsibility of the American government to reward able bodied Americans with financial assistance. Our federal government should provide a “hand up” to those in need of assistance, not a handout for those who can take care of themselves.

Our federal government should aid Americans who are truly needy, such as those who are sick, disabled, or elderly. It is certainly not the role of government to provide free cash to Americans unwilling to work.

Yang continues this disturbing trend in the Democratic Party to try to buy the votes of Americans with handouts. Among the current field of Democratic presidential candidates, there are proposals for free healthcare, free education, the elimination of all student debt and now free cash.

Yang is hoping this stunt will catapult him into the top tier of Democratic presidential candidates in this election. With such an unimpressive field, his gambit may work, but it is unfortunate that his main message is to give people free money.

A better approach is what President Trump has achieved in our economy. He has provided tax cuts, reduced government regulations and given Americans an opportunity to succeed. Fortunately, Americans have taken full advantage of the President’s proposals and more people are working today than at any point in our country’s history.

This county was built into the world’s only superpower by Americans who enjoyed risk taking and engaged in courageous exploration. Americans have a great history of bold entrepreneurship and hearty individualism. It would be a travesty if we abandoned that history to follow the lead of so many ruined socialist and communist nations who saw citizens not as partners in a successful future, but as just wards of the state receiving crumbs from an almighty government.

With such contrasting visions of our government and the future of the country, the stakes of the 2020 presidential election could not be higher.

More in this category: « Debating Trump impeachment inquiry; Truth, rule of law is not free No GOP victory lap over Lewandowski hearing, just Trump lap dogs »
back to top