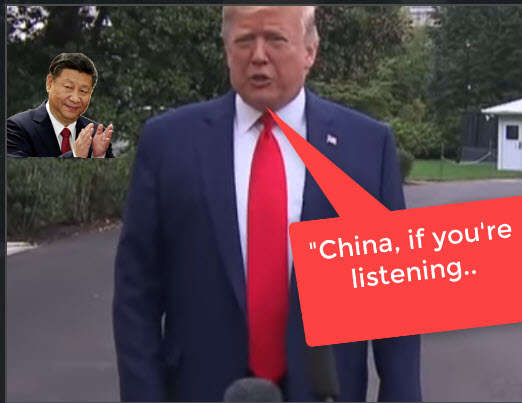 I could provide a litany of reasons that this man in the White House has demeaned, embarrassed and abused the office of the Presidency. I could offer you 15 thousand or so lies and false statements documented since he descended the escalators on a hot June 2015 morning.

I could tell you how improper it was to lie, as president about the payments to two women during the last campaign to cover-up his bad deeds.  I could cite his incredible gall and abuse of trust in which he engaged in the possible building of a gigantic tower in Moscow. This occurred prior to and during the entire election season. He told not the media, nor the Republican Party, nor his GOP opponents when they questioned his Russian interests.  He denied having any business in Russia which simply was a deception at best and a bald-face lie at worse. When so many of us were shocked about his allegiance to Putin and Russia, he denied any Russian involvement.

I could go into great detail about how he lied to the media about the Trump Tower meeting involving his son and how he said there was nothing wrong with lying to the New York Times.

I could ignore dozens of pitiful behaviors and in my view, illegalities he has engaged since taking the oath of office to uphold the constitution. I could fast-forward and point to the latest controversy where he and Rudy Giuliani conspired to get information from the Ukraine government and to request that they investigate his top opponent, Joe Biden and his son. Actually, I think the just-released transcript and the whistleblower complaint along with statements by Rudy Giuliani and verifications by the Investigator General and the Director of Intelligence are clear pieces of evidence that the intent of the White House was to bully the Ukrainian president to pursue Biden.

But, that will not be enough for my Republican friends. Instead, they will state, as they always do, that it is fake news, or Hillary, or whatever Hannity and Rush claim to be true.  They will cite that the Democrats are engaging in another conspiracy to destroy Trump, to engage in a coup to overthrow an elected president. They will cite “Shifty Schiff” as evidence that the entire whistleblower complaint was made up.

Nor, am I defending Democrats. If there has been any broken laws or wrongful behaviors, whether in the upcoming "investigation of Russia investigation" or inappropriate activities by Democratic members of the House Intel (or staff), obviously, we should always know the truth, to the fullest extent possible.  Wrongdoers must pay, whether Republican or Democrat.

However, today, Donald Trump crossed the line. He openly said on the White House lawn that he would like China to investigate the Bidens.  What does that tell us? Well, for one, it is strong evidence to prove that Donald Trump’s motivation in that phone call with the Ukraine President, was not really about corruption in Ukraine but about getting the dirt on the Bidens.

For Trump to solicit the help of the Chinese (the country with whom we are at trade war), to get dirt on Biden, destroys his credibility forever (not that there has been any at all).  Will Biden be part of the incentives in the trade deal? Will Rudy and Bill Barr and Secretary of State Pompeo and Vice President Pence be dispatched to do the secret work, not for the government but for Donald Trump’s political life?

The hypocrisy coming out of the mouth of Trump is astounding. For two years, he has blasted Democrats and Hillary for engaging in paying legal fees to a law firm which hired a consulting firm which hired a British investigator to get dirt on Trump. They have claimed that doing so was unAmerican just as Trump has claimed it to be treasonous.  But this was not President Obama, or Biden or John Kerry or Loretta Lynch directly seeking assistance from the Russian government for the dirt. This was an investigator being paid by a campaign and party to get dirt on a presidential candidate without directly involving the Russian government. Also, there is zero evidence that the payors director the investigator to do anything. For instance, they did not tell him to question Putin or any particular person. All of the investigation was in the control of the investigator, the way these kind of interactions should be.

But, here, the President of the United States has directly asked at least two foreign governments to take actions that he knows would have a very serious impact upon our elections.  There is no corruption of China that Trump is worried about as he claims about Ukraine. This is raw solicitation of a foreign government to help him win an election. Nothing more. Nothing less.

So, I don’t expect the Trump controlled Republican party, led by his family, to do a single thing to change their defense. I don’t expect Steve Scalise, Kevin McCarthy and Mitch McConnell to stop throwing out allegations they never seem to be able to prove.

Nor do I expect my Republican friends and Trump loyalists to stand up and say “enough”.  I don’t expect them to wonder how they can pursue the Obama administration for trying to undermine a campaign when they are silent about Trump. I know Trump feels justified, that he’s doing this for country (or so he says).  I also know that Team Obama could easily say they were justified in taking these intrusive actions because at the time, (and now) it appears that Trump is beholden to Putin and that country.

So, lately, we know that Trump has refused to deny receiving help for a foreign government. He has actively tried to get the Ukraine president to investigate Biden and that his administration was withholding money allocated by Congress. We know that Rudy was operating under the radar digging up dirt and creating his own dossier of conspiracy theories. We have been told recently that Trump told the Russian government that he was not bothered or concerned about Russian interference, which now renders our future election suspect.  Yes, it is reported he said he was not concerned because according to him, “we all do it”

And now, we know that Donald Trump knows no bounds. We heard Trump ask China to investigate Biden and son. There was no request that China stamp out corruption. This was the worst display of unAmerican behavior by a President who has a very long history of shocking over-the-line statements and actions that merits serious scrutiny.

So, for those Republican friends who are willing to listen-- ask yourself if Donald Trump is worth your support. Ask yourself which Democrat candidate for President, or Senator or House rep or Governor would you allow to solicit a foreign government for campaign help, whether it be campaign money, or campaign workers or speech writers or yes, investigation to defeat their opponents.

The line has been crossed. The only question is whether you want to see it, or not.

More in this category: « Knowing Dems seek impeachment, Trump is his worst enemy Lindsey Graham will be Trump's Goldwater in Nixon-like reality shock »
back to top