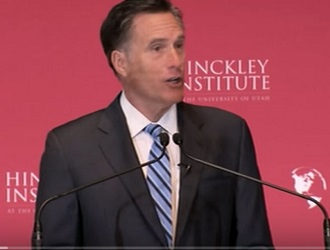 Ultimately, Romney proved to be a horrible candidate. He should have beaten a vulnerable President Barack Obama. In fact, he showed his weaknesses as a candidate in 2008 when he lost the GOP presidential nomination to John McCain.

Romney has a hard time connecting with Republican voters and does not have a core set of conservative values that connects him to the base of the party. What he does possess is unquenchable ambition to be the President of the United States. It is why he ran for the U.S. Senate in Utah in 2016.

He really does not care about Utah or the United States Senate, but it is a national platform for Romney to attack President Trump. Despite his endorsement from Trump, Romney has spent the last several years viciously attacking him.

In the 2016 presidential race, Romney chose not to run, but tried every effort to derail the Trump phenomenon. He launched scathing attacks against Trump and even supported a gadfly Republican running against him. His real hope was to create a scenario that led to the election of Hillary Clinton as President.

When it did not work, Romney pitched himself to then President-elect Trump as the perfect candidate for Secretary of State. He wisely decided not to pick Romney. It would have been a disaster for President Trump to have chosen a political enemy for the most important position in his administration.

After losing the Secretary of State sweepstakes, Romney launched a 2018 bid for the U.S. Senate seat representing Utah that opened with the retirement of Orrin Hatch. With his name recognition and fundraising abilities, Romney was the easy winner. Unfortunately, Utah traded a very pro-Trump conservative for a very anti-Trump moderate. Not a good exchange for the people of Utah.

Since his election, Romney has used every opportunity to bash President Trump. His latest broadside occurred in the aftermath of the President’s call for Ukraine and China to investigate the questionable deals involving Joe and Hunter Biden.

Romney tweeted “When the only American citizen President Trump singles out for China’s investigation is his political opponent in the midst of the Democratic nomination process, it strains credulity to suggest that it is anything other than politically motivated. By all appearances, the President’s brazen and unprecedented appeal to China and to Ukraine to investigate Joe Biden is wrong and appalling.”

What is “wrong and appalling” is that Romney mimics liberal Democrats in his regular denunciations of President Trump. When the transcript of the President’s call to his Ukrainian counterpart was released, Romney labeled it “troubling in the extreme...deeply troubling.”

Romney knows that when he attacks Trump, he will receive glowing praise from the liberal media. Every time, Trump-hating reporters flock to Romney for comment, which is exactly what he craves the most.

His anti-Trump crusade may be part of a plot to run again and challenge President Trump or he may be angling for launching a presidential campaign in 2024. Whatever the real motivation for the Romney attacks, it revolves around his selfish political ambitions. What is does not reflect is any desire to help the people he was elected to represent; the citizens of Utah.

More in this category: « Lindsey Graham will be Trump's Goldwater in Nixon-like reality shock GOP, La. Congress stand up for Kurds as Trump stands down Turkey assault? »
back to top