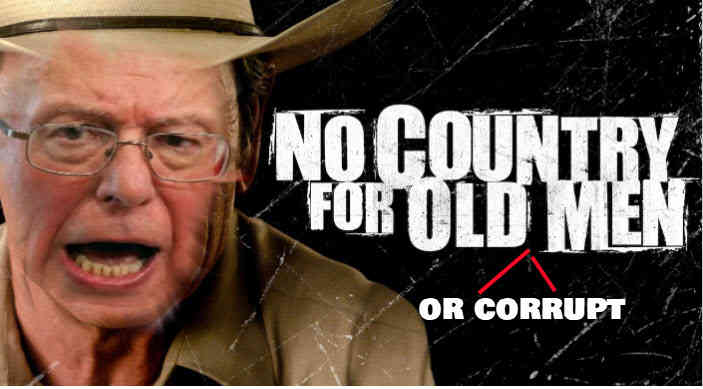 Bernie was wise not to pull the plug immediately. There are staff considerations, and millions to be allocated to a successor campaign, most likely Elizabeth Warren’s. That the two share similar views may keep his troops engaged in the 2020 campaign. Sanders deserves credit for energizing a new generation of voters who, more often than not, expressed the belief that the system was rigged and corrupt. Goodnight Bernie.

Uncle Joe Biden is another Democrat whose expiration date has passed, evidenced by his slow slide in the polls. Biden looks, and sounds, like the old man he is, and it’s doubtful if he could ever bring the Sanders youth brigade into his fold. Joe’s sudden death blow, however, came at the hands of Donald Trump, and not old age, when the president pointed out that the former V.P.’s son, Hunter, made millions in the Ukraine gas business and Joe got his hands dirty in the tar patch that’s the Ukrainian justice system.

Had the sticky revelations come after a Biden nomination, it’d have been a brilliant move by the Trump campaign. Coming now, it was a waste of an Avada Kedavra's curse that would have killed any chance Democrats had at the White House. This illustrates what a quagmire the Ukraine is for any candidate. Trump, himself, should’ve known better than to push his luck there. Ask ex-campaign chair Paul Manafort, of the $500,000 Oriental carpet, tacky Rick Pallack Ostrich jackets, and daughters who texted that their fathers’ wealth was “blood money.” Joe sure picked a swell spot for his kid to get rich.

Then there’s Rudy Giuliani, Trump’s new secretary of state for the Ukraine. Called a loudmouth, manic, a loose cannon, off the rails, the president’s new personal attorney sounds a lot like his last personal attorney, Michael Cohen, when he says he has it all on tape, has papers, has this, and has that, except no one ever saw Cohen’s evidence because he folded the hand with a plea. Rudy may get to make the same choice, though his defense lawyer could do worse than advise him, “keep up the “bluster, fluster, and yak away, for everything you say may prove you were nuts on any given day.”

It’s a stunning descent for America’s Mayor who once enjoyed universal acclaim for his performance following 9-11. That man no longer exists, but give the doppelganger his due, for all the questionable, quirky attributes, he’s a wonder to behold, a Rube Goldberg perpetual motion mouth that, in due course, may prove to be the undoing of the president, unless his honor is fired fast.

Caught flat-footed in the midst of the maelstrom is virtually every Republican office-holder, especially those unable to say foreign interference in U.S. elections is wrong. Here’s some advice; nominate Mitt Romney. He knows the ropes and is a moderate. Keep the White House and save seats.

Bayoubuzz Note: Below are Tweets or Instagram posts that appear electronically. We have no control over the content and apologize if any post transmitted on this page is offensive.