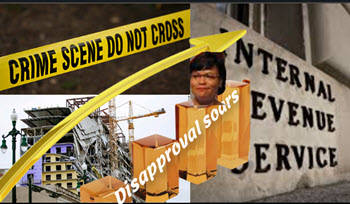 If the election were held today, Cantrell would likely win another four years in office. A new poll by Edgewater Research, LLC shows that Cantrell has an approval rating of 53%. While it is down from her 57% approval rating in 2018, it still reflects support from most New Orleans voters.

What is most significant is that the poll showed the Mayor’s disapproval rating had soared from 17% in 2018 to 42% in the latest poll. This indicates that many previously undecided voters have turned against the Mayor. In other words, as voters have gotten to know Mayor Cantrell, they don’t like what they see. Only 5% of the respondents were undecided, so there are very few people without an opinion about Mayor Cantrell.

Despite her positive approval rating and historical advantages, the Mayor does face some challenges. It was recently reported that she owes $95,000 in back taxes to the IRS. While she claims she is working out a settlement and refuses to discuss the details of the liability, such disclosures are never desired for any politician.

Another frustration for the Mayor involves the ongoing problems with the Hard Rock Hotel. The building partially collapsed on October 12, 2019, but demolition has not been completed and it remains standing. The City of New Orleans is losing millions of dollars as some businesses are negatively impacted and portions of a major thoroughfare, Canal Street, remain closed.

The embarrassment of the situation forced the parent company, Hard Rock International, to send a letter to the New Orleans community stating that “we remain confused and frustrated at the length of time it has taken to resolve the issue.” To make matters even worse, the remains of two deceased workers are still in the building as it is still too unsafe to remove them. Lawsuits have been filed by the families of the deceased workers among many others. Resolving the court cases will take years and be quite expensive for all of the parties responsible for the tragedy.

Another challenge facing the Mayor is the crime problem. While the murder rate is down to historic lows, there have been increases in other crimes, specifically automobile burglaries. The main offenders have been juveniles, many of whom are arrested on a regular basis only to be subsequently released.

In response to the crime surge, the Cantrell administration announced that it will create an evening reporting center for juveniles and a supervision program with social workers. Another approach is to unleash the police department by removing the consent decree that is limiting proactive measures that officers can take. According to the Orleans Parish District Attorney Leon Cannizzaro, police officers are “not allowed to participate in chases and again that sort of empowers…the criminal to go out and be more brazen on the streets.”

In the second half of her term, Mayor Cantrell will undoubtedly continue to face the crime problem and voters will render their verdict on the success or failure of her response to that issue and the other major ones that will impact the city. Right now, it looks like she will win re-election, but an opportunity has been created for opponents to challenge Cantrell. The seriousness of the opposition will be determined by how the Mayor responds to the trials and tribulations of the next two years.

More in this category: « DOJ Deep State Strikes Back over Barr Wars, Trump clash Jobs never coming back, Trump's enabling Putin, IS »
back to top