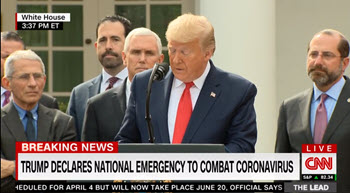 It is certainly a major health crisis as the coronavirus has spread across the country and 1,268 Americans have contracted the disease and, sadly, 33 people have died. It will undoubtedly continue to spread for several weeks or months before it starts getting better.

In times of crisis, a nation needs to rally behind their leader. For our country, during this coronavirus outbreak, our nation should show solidarity with President Trump and his administration.

The President is facing a health challenge, unlike anything this nation has seen since the Spanish Flu epidemic of 1918.

In late January, he took decisive action by stopping air travel from China and later expanding it to include South Korea, Italy, and Iran. Tonight, starting at midnight, all flights into our country from 26 nations in Europe will be stopped as well.

With every decision, his actions have been criticized by Democrats and the media, such as CNN White House reporter Jim Acosta, as being xenophobic or partisan or misguided. In actuality, the President is just fulfilling a policy he promoted in the 2016 election. He promised to put “America First” in everything he does as President. It is especially important during a health crisis, for President Trump to put the lives of our citizens first.

Unfortunately, this week, Democrats have used their media platform to blast President Trump. In his media statement on Wednesday, U.S. Senator Bernie Sanders (I-VT) called the President a barrage of insults, including “racist” and “sexist.” Yesterday, former Vice President Joe Biden, the leading candidate for the Democratic Party’s presidential nomination, used his media opportunity to disparage the President’s response to the coronavirus.

In contrast, President Trump is showing leadership and calling for unity. He has been holding regular press briefings on the national response to this crisis.

He is not engaging in partisan politics during this time of crisis. For example, he signed into law a bipartisan $8.3 billion coronavirus aid package. He has repeatedly implored Democrats to work with him on economic packages, including a massive payroll tax cut and other financial relief, to spur growth during this emergency.

In this case, it is even more important for our country to put politics aside for several weeks and speak with one voice in dealing with this health crisis. President Trump is the leader of the entire nation and we need him to succeed in fighting this dangerous enemy. All Americans, Democrats, and Republicans, should support his efforts today. There will be time for politics later.

AGREE OR DISAGREE? TELL US BELOW