Rally around the economic lag, Louisiana and New Orleans must open up Featured 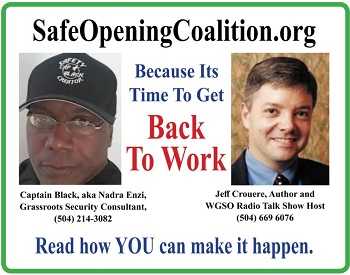 The new unemployment numbers are horrific. Another 4.5 million Americans applied for unemployment benefits last week. Since the beginning of this health crisis in March, the total number of unemployed Americans has exceeded 26 million.

Some experts believe the unemployment rate will eventually surpass 20%, nearing the all-time high of 24.9% in 1933, in the middle of the Great Depression.

Of all the states in the nation, Louisiana has been particularly hard hit. In the past month, Louisiana has suffered the second highest percentage increase in unemployment. This has occurred because the shut down has devastated the major industries in the state.

Due to declining demand and increased production from Russia and Saudi Arabia, oil prices have dramatically dropped, and thousands of jobs have been lost. Coupled with the Covid-19 pandemic, Louisiana’s economy is reeling. Most of our major industries such as chemical production, agriculture, housing, manufacturing, and commercial fishing are dealing with serious challenges.

Despite the problems in these other economic sectors, the industry with the worst crisis is hospitality/tourism. Our state’s economy depends on generating millions of visitors each year. In the middle of a pandemic, no Americans want to travel and visit New Orleans and the other state attractions. Thus, our cruise ships, hotels, restaurants, bars, festivals are out of business.

To make matters worse, New Orleans Mayor LaToya Cantrell has shut down the city until May 16 and recommended that all events be canceled for the rest of the year. This decision was made without consulting business leaders from Jefferson Parish, the largest parish in the region.

The unilateral decision irked Jefferson Chamber President Todd Murphy, who wrote a letter to Cantrell complaining of the decision. With no events in New Orleans, Jefferson Parish will surely face consequences, so their business leaders should have been consulted by the Mayor. This letter was not received well by Cantrell, who vowed that she would not be “bullied” by business leaders.

Cantrell was also upset at a newspaper ad underwritten by New Orleans business leaders who called for the opening of New Orleans. These leaders know that a shutdown is not sustainable.

Today, New Orleans is a poor city with tremendous economic, housing, health care, and infrastructure problems. Fortunately, a multi-racial group of private citizens has been organized, www.SafeOpeningCoalition.org to promote the return of commerce to New Orleans.

Our group is advocating the safest and quickest possible reopening of New Orleans. The Mayor’s shut down order can be reversed by a majority vote of the City Council. So, the more citizens who contact their city council members, the more likely the Mayor’s order will be rescinded or modified at the very least. We only want to see New Orleans safe, healthy, and working again.

This determination is shared by people across the state. On Saturday, a rally dedicated to ending the shutdown will take place in Baton Rouge at the State Capitol. It will be held from Noon until 2 p.m.

Participants will be exercising their 1st Amendment rights to speak, assemble, and petition our state government. Our U.S. Constitution exists even in a pandemic.

Hopefully, the message will be received by the Governor and he will act swiftly to open Louisiana for business once again. The longer the shutdown continues, the more the economic catastrophe will eliminate jobs and opportunity and create an assortment of other problems from an increase in the suicide rate to other health problems.

For a variety of valid reasons, it is imperative that Louisiana join Georgia, South Carolina, Texas, and many other states and start to open their doors for business. If we are going to have a recovery, it must begin immediately.

More in this category: « Coronavirus false alarms are ringing, Hi-Ho, it's back to work we go Depression is contagious; America, put these men to work »
back to top