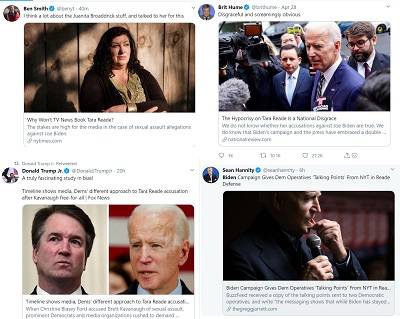 Tara Reade is a former Senate aide who previously said she encountered one of Joe Biden's unwanted touches. The facts she is now alleging are that Senator Biden, roughly two decades ago, attempted to do a Trump--Grab her by her p***y.

There has been some corroboration that Reade has complained to others, which included her filing a Senate report many years ago. This weekend, a story emerged that a former neighbor came forward to confirm that she had been told about an unwanted advance. Other friends and family members have corroborated that Reade had mentioned it at various times in the past. A video of her now-deceased mother calling into the Larry King show also became public in which she asked what her daughter should do since a powerful man had attacked her. Mom left no names as to whom that attacker might be. The University of Maryland possesses Biden's US Senate file, which is in archival, which Reade claims would contain her formal Senate complaint she filed after it occurred. The university won't release any information until Biden is no longer in public life.

None of the above proves either that Reade was physically battered nor that the younger Biden was the offender. However, they absolutely do raise serious questions whether Biden has a #MeToo problem. They also mean questions must be asked, and Biden can no longer run away from the story. His response as of now has been to state he has advanced women's rights, and that alleged battered women should be heard. He also claims Reade's story is not valid.

Not at all surprising, however, are the Trump family, his loyalists, and his media talking and tweeting heads gleefully trying to take political advantage of these new developments. They are pushing the story at every opportunity. The likes of Don Jr., Brit Hume, and other twitter activists have gone on an online rampage, tweeting how predictable it is that the # MeToo'ers are now silent, since Biden's name is attached. They publicly ask why the media has not pursued the Reade story with a vengeance. But, they are absolutely the wrong people to do the complaining or any of the finger-pointing.

Over the past four-plus years, well over twenty women have come forward to accuse Trump of somewhat similar sexual assault behaviors. Let us also add the women who have accused Trump's friends, men such as Bill O'Reilly and Roger Ales. We must tally Judge Kavanaugh and Roy Moore to the long list. Trump and his flock, offered "politics as usual" as their defense. Not once, that I recall, did any of them provide anything but contempt towards any of the women.

They ridiculed Stormy Daniels and Karen McDougal when their claims emerged.According to Trump, all of these women were lying. Trump even audaciously and pitifully denied paying the money to those two women. He's still apparently insisting he did not have sex with either one of them. The president even claims he did not know what his attorney Michael Cohen in confecting a hush agreement after it became impossible to keep the story straight. Cohen went to jail. Trump was named as an unindicted co-conspirator in court pleadings. The responses I receive any time any discussion is raised about these facts range from "who cares" to "your a Trump hater." I never hear words denouncing Trump for covering up his past.

We certainly would not expect Trump ever to ever admit the truth, as embarrassing it might be. Nothing but falsehoods would probably flow from his lips even if he were injected with a Lysol-sized bottle of truth serum.

But, those folks who have done Trump's bidding, denying facts, berating the women who have claimed being abused by a younger version of Trump simply have no standing to slam Biden or the media for what I am now calling the #BidenToo controversy. They have lost all moral authority to speak up with indignation and complain that the Biden backers and the media are doing the Democratic Party nominee's political bidding.

Just in case nobody has noticed, we are dealing with the worst economy and health problem in history. The media follows stories its audiences want to know about, which is one reason Reade has not become a household name. Despite the lack of concern and other matters occupying their collective minds, there have been probing by the media folks and not just Fox News.

More importantly, new facts have emerged over the past seven days.

We are now being told the "touch" was a real sexual battery. Reade's former neighbor has spilled some beans. The Larry King tape has added another level of corroboration. As a result, the media has had to do a lot of "soul searching" as to proceed. Thankfully, they have noticed and are now responding as journalists should. They are now asking serious questions and are demanding more information and facts. They are beginning to urge that Biden speak out and answer questions, not hide in his basement. They are doing what they should do and follow the story regardless of how they might feel about a second Trump presidency.

Facts about what occurred twenty years ago in Biden's and in Trump's pasts are absolutely relevant to who they were back then. The allegations also relate somewhat to their current personalities, although both are in their seventies. Any ongoing coverup of these events is even more probative as to their respective abilities, to be honest, a trait, so sorely missing in our government.

But, it is ironic that the Trump promoters and his army of apologists should be asking for records such as from Maryland University. The word hypocrisy doesn't even describe how the same people have cordoned off Trump's financial documents, taxes, governmental records, anything and everything that would or could reveal Trump's past and, worse, his current conflicts.

These apologists insisted that all of the women were liars. They told us whatever Trump might have done a decade ago has no bearing upon his being president. Now that the tables have turned, their current "but, look at Biden" statements are really nothing but self-serving politics-as-expected, especially during a scorching presidential campaign.

Sadly, they and anybody who want to hide or downplay relevant and legitimate facts about either of these two candidates for the White House should lose their rights to complain.

In my books, they belong in the #notme archive of morality.

(Agree or disagree? Discuss it below)

More in this category: « Depression is contagious; America, put these men to work Time for Biden to say bye and hit the Reade road »
back to top