Of Musk and Masks: Trump takes US to new heights and new lows Featured 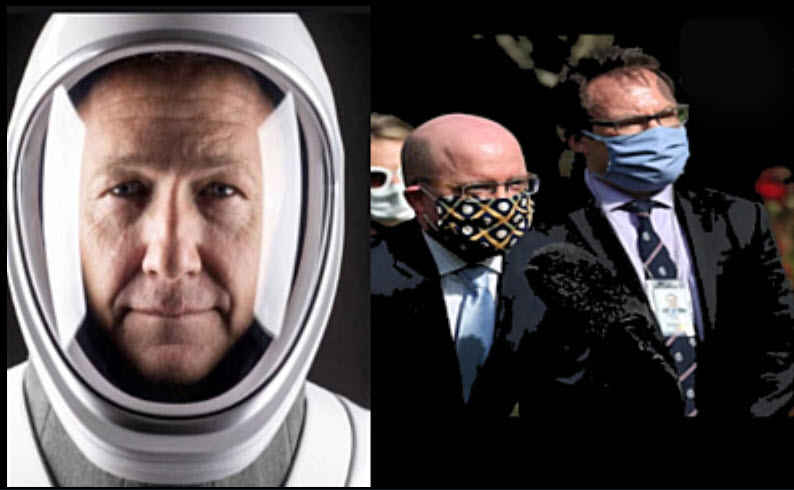 Today, if the weather prevails, America will hit two milestones.  The first is our return to space with the first launch in nearly ten years of a US man-occupied spacecraft.  The second did not take a decade. Nor did it take ten months.  Within less than three months, this country has witnessed the most destructive population genocide in American history, thanks to Covid-19.  On leap year day, the first corona-virus death was recorded. The virus which we were told would suddenly disappear has resulted in the morbid and jaw-dropping disappearance of 100,000 loved ones.

The deaths only tell part of the tale.  This disease has sent many Americans to the hospital, some surviving thanks to incubators and personal sacrifice of the brave first-responders and medical teams.  Other people contracting the virus have experienced a less tenacious intrusion. Of course, all of us have lived through a self-imposed economic lockdown, devastating our growing economy. One day, sooner rather than later, we will return to the roaring stock and job markets and the healthy American production. Unfortunately, however, those who have died from this scourge can, of course, never return.

Shortly after the Space-X rocket lifts from the terrain over the Atlantic Ocean, President Donald Trump will take credit for the achievement. Under his leadership, a commercial-public partnership has been created and flourished, and an old industry resurrected.  Because of his vision and emphasis, he and Vice President Mike Pence will take victory laps. They will speak to the public extolling the magnificence of  American science and technology, and of course, their leadership.  It is a sure bet that when they do face the nation to praise Americans and their own achievements, they will not be donning masks.

On the one hand, Donald Trump and the White House will speak effusively about how they led entrepreneurs, scientists, researchers, universities into achievements of greater heights. On the other hand, they will showcase the very worse in America.  They will put their own vanity and lack of self-sacrifice over the demands that this nation accepts that Covid-19's continued threat can produce horror.

Trump and Pence are the two men who can set tones of success more than any others on the planet. While they should receive credit for fast-forwarding the re-opening of society after the worst economic meltdown in history, they willfully downplay the threats that all of us must realize. Unless we change our own behaviors, in simple unselfish ways, the death toll and sicknesses will soar as fast as Elon Musk's rocket rips through the atmosphere.

Unfortunately, our two leaders exemplify the worse in political selfishness and pandering imaginable.  Just take a trip down social media. Many of his loyalists frame this reign of terror as another Democratic and media scam,  despite the overwhelming science.  Worse, due to the statements and actions of the man most responsible in setting a public example, rebelling against the advice of Trump's own top scientists is a badge of honor.  To many of them, it is, amazingly, “patriotic” to not wear a mask or social distance. His political need is to jump-start the economy for the November elections. He actually has told us he doesn't believe in testing nor supportive of vaccines.  Yet, he demands that we should swallow the elixir he mysteriously prescribes as "game-changer," despite scientific evidence of real harm.

The leader of our nation sets the example. This week, Trump showed how despicably self-serving his own actions can be. He mocked Biden's wearing masks while in public display, as the former VP delivered an offering on Memorial Day. He suggested the face covers were “all show” because the Bidens have been basement dwellers for many weeks.

He insinuated the mask-donning was political. Amazingly, however, he seems to misunderstand the purpose of these facial coverings, which is to provide protection to others.  Yesterday his actions displayed the ultimate disdain for public safety.  Trump mocked a reporter's insistence on wearing his face protection when the correspondent asked the president a question. The man leading us into combat against the deadly virus called the mask-wearing, "politically correct."

Our hopes and pride will climb as we bathe in the wonderment at the bounty of opportunities that lie ahead as our American astronauts voyage into space once again.  Our sorrows from the horrid human losses and concerns for more tragedy will continue as the death toll continues to climb endlessly, hour after hour, day after day.

Sadly, America could be victorious together in defeating this killer disease.  We need to follow the advice of the scientists and leaders in the medical community working within Potus's own administration.  Instead, due to Donald Trump's destructive behaviors, this nation is divided into those who care about the health and safety of others versus those who see that type of concern as a weakness and, yes, believe it or not, "political correctness."

Today, thanks to this president, America is flying higher and faster into space than imaginable.  But, our country plunges into the ravages of death and sorrow because our "fearless leader" refuses to honor his own experts and to accept his solemn responsibilities.

More in this category: « It's curtains for Jeff Sessions after betraying Trump Unmasking Biden's hypocrisy and government control in America »
back to top