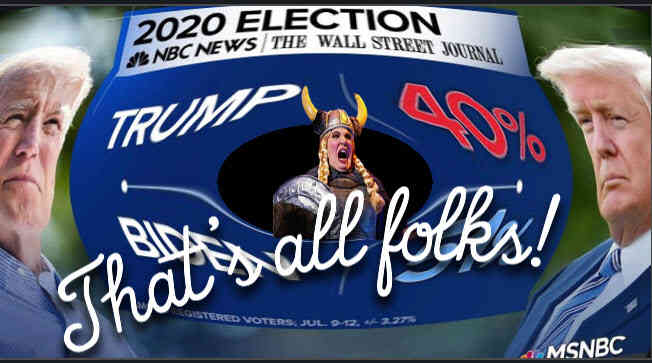 Now, he's watching his own administration and campaign flail and flub. The man who can never accept his own fault is quick to blame others, such as his "now former" campaign manager Brad Pascale for his election campaign failure. Remember, he calls the shots. They are letting Trump be Trump. He breaks the rules by holding what is widely viewed as a campaign rally in the Rose Garden of the White House. He allows his administration to take down the top infectious disease expert right in front of our eyes. The President sees little risk in playing the race-card by insulting NASCAR for its decision to ban the confederate flag. Ignoring the concerns of minorities at a time of a tremendous racial awakening is his call.  He has won the title of the Great White Hope, but now, the United States is not as White as it once was. Plus, Americans aren't sure if their businesses will last, if their kids will go back to school, or if their gramps or granny will survive as the Corona scare.

While the President claims the polls are lying and are fake, they surely can't be too amiss given yesterday's reshuffling of the campaign chairs.  Winners don't pull their star players, such as their campaign managers when they have momentum. One of Trump's greatest fears, being soundly branded as a "loser," must keep him awake, assuming he sleeps.

Yet, despite the media noise, this election is far from being over. The Fat Lady needs to sit down for now.  While Trump's Teflon seems to be melting, judging by the 2016 incredible political shock, he is far from calling it a day.  To his credit, and maybe to his blame, one of his most impressive qualities is to double down when others believe he might be down for the knockout.

We still have about 100 days for this election to be signed, sealed, and delivered to history and the American future.

Let us not forget that polls are snapshots in time, nothing more. They change suddenly and quickly, on time, and in real-time.

Taking a ride upon our "poll history engine 2016", on March 24 2016, Hillary Clinton enjoyed a whopping 50 to 38.8 advantage in the Real Clear Politics average of polls. One month later, April 23, Trump led the former Secretary of State by a slither, .1%.  Fast forward the summer, on August 8, Hillary took the lead 48 to 43, which was the Democrat's most robust advantage until the fatal December 9 moment. As the days got colder and the election anger got hotter, on October 17, the former first lady led by 7 points. The victory champagne was being iced.

On that day, Trump released a video showing cooperation between the FBI and the Secretary of State's office on matters of the Clinton email.  On November 3, with less than a week to go, the gap spiraled down to 1.5% differential. By that time, the sudden decision by the FBI's Jim Comey to reopen the email investigation had hit full throttle, aided by the daily drip and inundation of Wikileaks emails, courtesy of Putin's Russia.

In part, Hillary Clinton, thanks to the FBI closing the special Anthony Weiner investigation, climbed into the captain's seat on election day eve. She was enjoying a 2.8 percent margin. All there was left was an earthquake, hurricane, and atomic bomb blowing up the Democrat's glass ceiling only 24 hours later.

The election has a long way to go. Trump might get his act together, realize that his best chance to victory would be to demand everybody to wear masks, which would push the hospitalizations and cases downward.  If that were to happen, the economy would surely correspondingly match. He could ride into election day, proclaiming he beat Covid-19, and that only he could do it. Or, matters might worsen. The flu season might kick in, compete with the pandemic disease, which would lead our schools, hospitals, and the economy in a panic.

The 2016 presidential election reinforced that in the land of politics, what you see today is a mirage.  If you have any doubts, just ask Mike Dukakis, who blew a 17 point post-July Democratic convention landslide massacre and lost to George H.W. Bush by 7.8 percent, overall, a near 25 percentage point decline in a mere 100 days.

The Lesson? Don't be popping any corks.

After all, the Fat Lady ain't about to sing "That's all Folks".

More in this category: « Flynn hoax and a Durham Report delay, is justice denied Trump and anti-maskers push his COVID lies but provide no solutions »
back to top