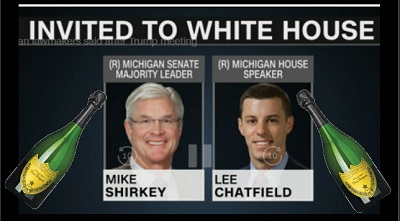 As we know yesterday, top Michigan legislators made it to the White House. Trump's press secretary suggested that they're coming was not because of the elections, but because the president just chatted with state officials from time to time. And this just happened to be one of those times.

But apparently, notwithstanding such assertions, they did manage to talk about elections. And they, the Speaker of the House, and the Michigan senate leader said that they had not seen anything that would make them do anything other than follow the law, which presumably means to allow the certification of the election to proceed this Monday. The President had different thoughts, though, he asserts that the media got it all wrong, that he will show massive and unprecedent fraud, though to date, none of the roughly 30 lawsuits filed in the various states have shown a scintilla of such fraud.

Meanwhile, the state Republican Party of Michigan and the National Republican committee Chairwoman have written a letter to the Michigan leaders, legislative leaders, urging them a two week investigation claiming that if there was no such investigation, the entire election would be forever in doubt, forever in doubt--let's not forget the anti impeachment motion was a little bit different. Back then Republican Senate Republican said MOVE ON, NOTHING HERE, MORE ON, but it gets a little bit better.

The Michigan House and Senate leaders somehow made their way to the Trump hotel last night and happened to be found sipping from a bottle of Dom Perignon champagne, which i understand cost about $750 at the Trump ritzy hotel. Now, you'll note that they didn't wear a mask while celebrating this-- no masking is kind of a custom, quite frankly of the Trump world just as the president his wife, son Baron, Don Jr, numerous Trump staff, White House staff, Republican leaders, have encountered so far.

Also note that the missing leaders said that they were at the White House to get federal money to help the pandemic. I understand Dom Perignon is pretty good treatment for the virus.

Earlier today those Michigan leaders were spotted leaving the Trump hotel. Apparently it had a nice stay at Trumpdom, which I assume is fine with the president because every time a leader comes to visit to Washington and happen to stay at the Trump Hilton, the word it's called now to visit him or maybe somebody else and drink his champagne. More money goes into the Trump Organization, or shall we say the President's own piggy bank?

Such travel includes entourage security and who knows what else and who else might tagalong who pay for this trip and the Uber expensive stay in the DC swamp, the Trump hotel?

Don't quite know. Meantime, thousands of Michigan residents are lined up for Thanksgiving pandemic handouts due to what is called hunger. The President didn't tweet about that. Nor did he tweet about 196,000 people getting COVID-19 yesterday or roughly 251,000 dead. No he was playing golf, which was his over 300th time since becoming POTUS.