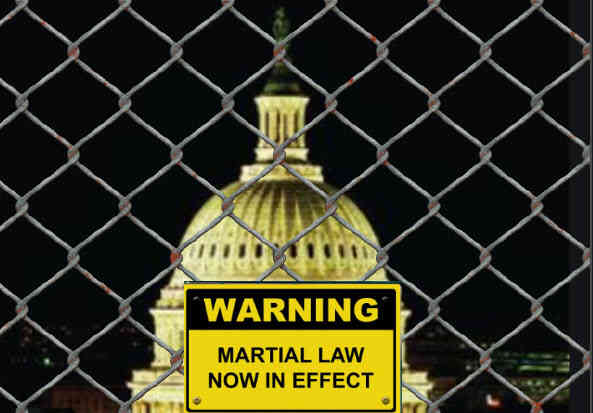 It’s official. As Donald Trump has become more unhinged and desperate, the "All the President's Men" (and women)  have become increasingly dangerous and out of control.   They are throwing around words of violence, martial law, executions and other emotives intended to incite others to anger.

For what? For Whom?

For Donald Trump, the loser. He can’t take the shame and loss of power.  He can’t win in court. Time is running out but not the flow of outrageous tweets, inflammatory untested claims and downright, molotov defamations launched at anybody who looks at him strangely.

The first item goes to Georgia attorney Lin Wood claiming that Donald Trump should declare “martial law”.  Below that is link to a Tea Partier WTPC press release which demands the president ignore the voters and simply declare martial law, kinda like the type we would see in Cuba or Nicaragua.

·
4h
Good morning. Our country is headed to civil war. A war created by 3rd party bad actors for their benefit - not for We The People. Communist China is leading the nefarious efforts to take away our freedom.
@realDonaldTrump
should declare martial law.

WTPC Calls for President to Invoke Limited Martial Law to Hold New Election and Protect our Vote, in Full Page Washington Times Ad, if Legislators, Courts and Congress Do Not Follow the Constitution

Akron, OH: Today, Tom Zawistowski, President of the TEA Party affiliated We the People Convention (WTPC) and Executive Director of the Portage County TEA Party, published a full page ad in the Washington Times newspaper demanding that President Trump Invoke limited Martial law in order to allow the U.S. Military to oversee a new free and fair federal election if Legislators, Courts and the Congress do not follow the Constitution.

Zawistowski said, "We wanted to express our concerns to the President, to the legislators, courts and Congress that We the People will NOT cede our exclusive Constitutional right to elect our Representatives to judges, lawyers, courts, Governors, Secretary’s of State, Congress, corrupt election officials and local politicians, the corrupt media - or Leftist threats of violence! It is OUR EXCLUSIVE RIGHT to elect our President and that sacred right has been infringed by the massive, planned, illegal election fraud conducted by corrupt Democrat/Socialist Party operatives across our nation to steal our vote. We will NOT stand for it."

Not to be undone, a former Trump attorney who has been outed in name only because of her far-fetched conspiracy theories endorses Trump cancelling the election he just lost, cancel Bidens’ inauguration and institute a military commission.

My gosh. wouldn't 3rd world military strongmen be so proud?  Not to ignore, Putin. Just think how little it took to torch this test in democracy, down to its ground.

Sidney Powell, until recently one of President Trump’s lawyers, shared with her followers a request that Trump should cancel the election he just lost, cancel Biden’s inauguration and instituted a “military commission” to investigate everything.

Here is a tweet that she apparantly supports, four-square: 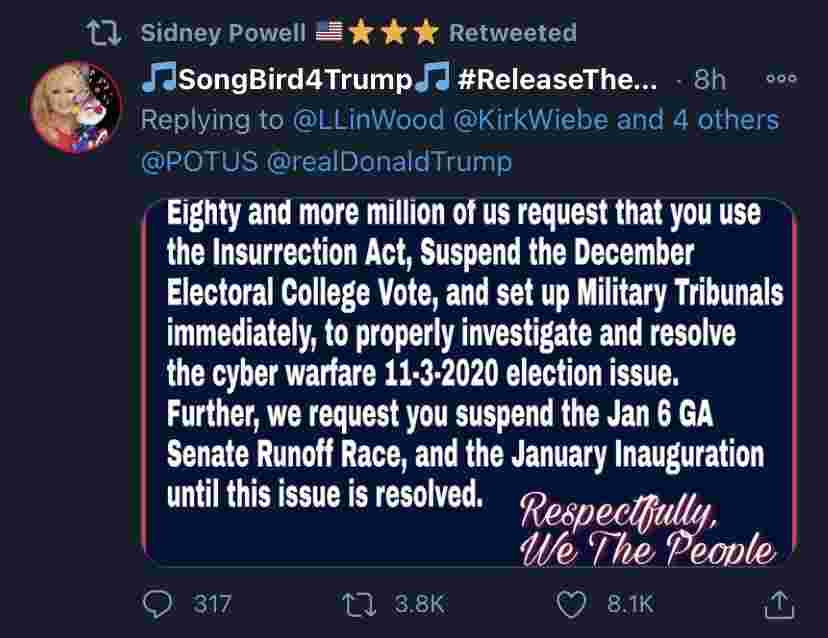 Yes. The attorney who Trump called one of her attorneys is promoting military tribunals. What fun!!

Then there Trump’s attorney, the infamous Joseph diGenova who wants more limited blood-shed. He’s fine with an old-fashion execution as he said Monday to a national audience:

“Anybody who thinks the election went well, like that idiot Krebs who used to be the head of cybersecurity, that guy is a class A moron. He should be drawn and quartered. Taken out at dawn and shot,”

The once respected journalist, Lou Dobbs, can’t suppress his own outrage. He claims crimes have been committed, although he names no names nor crimes. He demands dramatic action, saying if the DOJ or FBI don’t act, Trump needs to do so and find other resources in the federal government. Does Trump have a secret SS, perhaps?

“As Dobbs wrapped the interview with Powell, he said Trump needs to take “dramatic action” on the election and “the crimes that have been committed.”
“And if the Justice Department doesn’t want to do it, if the FBI cannot do it, then we have to find other resources in the federal government,” Dobbs declared. “This is an assault on the core of our democracy.”

Dobbs even went after Bill Barr after Fitton said the AG “talks a good game” but doesn’t deliver:
“I don’t think he talks a good game, Tom. I think he’s made a couple of timely statements perhaps, but he doesn’t even talk a good game. He is not involved in a game. This is an attack on the United States, whether it is from enemies domestic or foreign, whether it is both, I don’t know. But I can tell you this: for the Justice Department and the FBI to do nothing in the face of obvious, obvious fraud and the effort to rig elections across this country? This is stupefying.”

Speaking of Bill Barr.  He came out of hiding but after given permission to his Attorney Generals to investigate and prosecute, seems to have found dry holes.  Barr said during an AP interview today:

“We have not seen fraud on a scale that could have affected a different outcome in the election.”

Barr didn’t name Sidney Powell specifically but said: “There’s been one assertion that...would be the claim that machines were programmed essentially to skew the election results. And DHS and DOJ have looked into that, and so far, we haven’t seen anything to substantiate that"

Expectedly, Trump and his counsel would not be too pleased. The official response:

December 1, 2020 -Statement of Trump Legal Team on Bill Barr'sComments on Voter Fraud"With all due respect to the Attorney General, there hasn't been any semblance of a Department of Justice investigation. We have gathered ample evidence of illegal voting in at least six states, which they have not examined. We have many witnesses swearing under oath they saw crimes being committed in connection with voter fraud. As far as we know, not a single one has been interviewed by the DOJ. The Justice Department also hasn't audited any voting machines or used their subpoena powers to determine the truth."Nonetheless, we will continue our pursuit of the truth through the judicial system and state legislatures, and continue toward the Constitution's mandate and ensuring that every legal vote is counted and every illegal vote is not. Again, with the greatest respect to the Attorney General, his opinion appears to be without any knowledge or investigation of the substanbal irregularities and evidence of systemic fraud."- Rudy Giuliani, Attorney for President Trump, and Jenna Ellis, Trump Campaign Senior Legal Adviser and Attorney for President Trump

Folks, this country is in deep trouble. When Attorney General Bill Barr is the adult in the room, and you want to cheer his courage, you know something is just not right.