No masking over plague and pandemic impacts upon history Featured 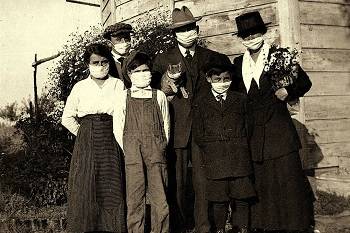 In the first year of the nineteen twenties, when many of our grandparents were alive, people wore masks to protect themselves from the Spanish Flu. Some went so far as to put them on house cats to protect the mousers.

Epidemics spare no one, rampaging from beggar to king, as the infection of our own president, his family, host of retainers, and die hard supporters demonstrates. It's said that Henry VIII slept in a different bed each night because he was afraid of the plague. Given his libidinous nature, however, there is more than one explanation for this behavior. One outbreak of this period was noteworthy for primarily affecting royals and the aristocracy who continued partying. In their case, parting indeed was sweet sorrow. It took the great Fire of London in 1666 to cleanse the City of plague.

Not everything was a loss, however, and true today. Shakespeare wrote his most acclaimed work during the plague that killed his siblings, and almost him, too. Broadway has elected to take a hiatus from plays for at least a month it was just announced. In previous times, facing similarly deadly consequences, quotas were imposed on public gatherings. The Globe, and other English theatres were shuttered.

Not everyone is a loser during times of plague. Charlatans posing as doctor have done a brisk business, as did unscrupulous clergy who hired themselves out to pray the sickness away. Ken Russel's film, The Devils, portrayed one such priest, played by Oliver Reed. Besides Shakespeare, Marquez and Defoe, among many others, authors have used death generating illness to creative effect. Medicine and science are two other beneficiaries of plague. In our time the development of vaccines has been accelerated exponentially over prior non-Covid times.

Jared Kushner's strategy to deny federal assistance to blue states in favor of red ones that voted for Trump, shows his callous disregard for human life, a certain hardness of heart, and a blackness of the soul that is truly surprising. No one can be deceived, by now, about the president's mind set, but no one would have expected his once liberal son-in-law, to advance political goals by promotion and assistance of what some may construe to be a form of mini-genocide.

Plague has lasted over human history going back to the most ancient times, sometimes in increments lasting for hundreds of years. It is not crepe-hanging to ask, as have health experts in unison, to take mutually berneficial precautions, like masks, avoidance of large gatherings, and sheltering to the extent possible. No one knows what survivors of Covid will face over a lifetime, or if C-19 will leap to life again among survivors, kill victims at some point in the future and what, if any misery, it may cause. Such things are left to God who we trust will be merciful in this regard.

More in this category: « Elephant in Biden's room will suck out oxygen, so pardon Trump Antifa vs. the Trump Patriots: The storming of the Capitol misinformation »
back to top