Cause Célèbre: BABBITT IS THE NEW GEORGE FLOYD Featured 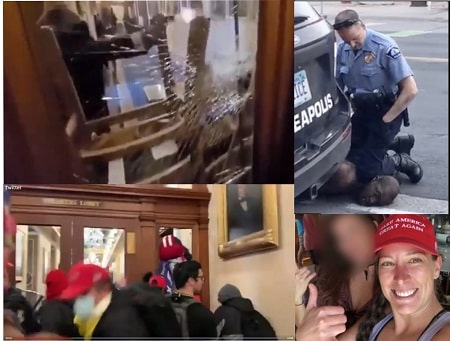 Some far-right wing sites are publishing the identity of the "alleged" cop that shot Ashli Babbitt.  The publications I have seen are showing a black man as the "murderer" as they put it.

You do recall, Babbitt was the lady killed on 1/6 as she tried to crash through the window of the door that separated the rioters  from the lawmakers.

You also do recall that Trump has demanded to know the identity as have many of his media and political allies.  They never seem to care that the whistleblowers or in this case, the cop fear for their lives should they be ID’D.

The cop has a bullseye on his back.  Any one of the same violent QANON "patriots" who swallowed Trump's stolen election fantasies might feel justified to avenge "Babbitt’s murder" as they now label it.

Seeking revenge for killing Babbit is now becoming a larger issue, a real cause celebre. The far right  quickly points out--a black cop murdered a white person in cold blood, a woman ex-vet, at that.  Babbitt is becoming the white George Floyd.

A fair comparison?  What were the capitol police’s options?

I suppose he could have waited for her to jump from the window and then nicely ask her to hand over any weapon in her possession?  Or, he could have grabbed her once she hit the floor.  Not sure if the rest of the mob--screaming for Pelosi and Pence’s heads--would have stood idle until it was their turn for a polite pat-down.

Let’s remember, Babbitt was crawling through a window refusing to stop despite a cop pointing a gun at her. Either she’s was very brave or very stupid. Now, unfortunately, she’s very dead.

According to a book by Wall Street Journal writer, Michael Bender, during last summer’s riots, it was a different Trump trying to stop the mob of BLM.  Bender reports that Trump urged his military forces to "crash the skulls" of the George Floyd protesters.

I doubt those same words crossed his mind when our loyal police defended our capitol, our Congress and our democracy.

But he did tell those who invaded our seat of government that he loved them and told them he understood their anger.

Somehow though, he doesn’t quite understand that Babbitt’s killer was defending our lawmakers as they hid from cover.

My best bet?  He could care less.