The "Awe" fullness of Trump's godly influence over his flock Featured 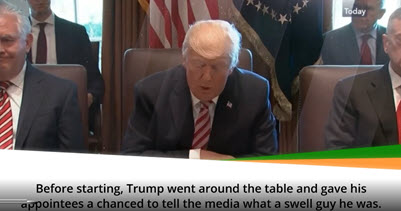 “Moreover, the entire project at times feels like product-placement for Trump’s various assets. Contestants stay at the Trump Towers and speak of him in hushed, reverent tones, fretting about what to name their teams in order to impress him.” Variety review of The Apprentice Jan. 4, 2004.

The groveling subservience and worship of Trump by many of his subordinates began almost immediately. Who can forget 1st chief of staff, Reince Priebus, groveling before his boss at the first cabinet meeting. Before starting, Trump went around the table and gave his appointees a chanced to tell the media what a swell guy he was.

Priebus led the charge with this fawning tribute, “On behalf of the entire senior staff around you, Mr. President, we thank you for the opportunity and blessing that you have given us to serve your agenda and the American people.” He wasn’t alone, Mike Pence chimed in with his own declaration of loyalty when he stated that being Trump’s Veep was “The greatest privilege of my life,” showing he doesn’t own a crystal ball.

In January 2019, Katherine Stewart, in a NYT Op-ed, criticized the far right for treating Trump’s election as a messianic event in which he had become, as she put it, “a vessel for the purposes of the faithful.” There is a quotient of mumbo jumbo in Trump’s mission, stemming from the 45th verse of Isaiah which describes God’s appointment of Cyrus as King. Theologically speaking, for some devotees, the verse is treated as a foreshadowing of Trump who, since he was 45th president, must, also have been divinely appointed.

In “The Blues Brothers,” Jake and Elwood skipped the scriptural gymnastics and simply announced “We are on a mission from God,” who is by all accounts omnipotent. Trump has claimed omnipotence many times, in his own fashion, with such catchy phrases as, “I alone can fix it.” He has, also, compared himself to Washington and is ambivalent about whether or not honest Abe was a better president than he.

It isn’t just the fundamentalists who have turned Trump into a savior. American Catholics, who in past few decades have made peace with their more conservative Protestant co-religionists, have tilted toward “Fundamentalism Lite,” including lionizing Trump for his anti-abortion stance.

At what point do Trump’s core supporters, and the one-time Republican Party, realize they’ve been taken. Should the miracle of August not come to pass, and Trump remains an ex-president, that would still the skepticism in my soul, and those of millions of others who look for a sign that our great nation has come to its senses. Till then, those who work to protect freedom, democracy, and equality are the ones who are on a mission from God. If you don’t believe me, read a dollar bill before you send it to Trump.

More in this category: « Trump's, conspiratorialists' election & vaccine disinformation reeks with Gaslight Is Trump's "bribery" of DOJ where GOP jumps off Trump train? »
back to top