Jindal touts his, Century Link's accomplishments during his administration--meets with CEO 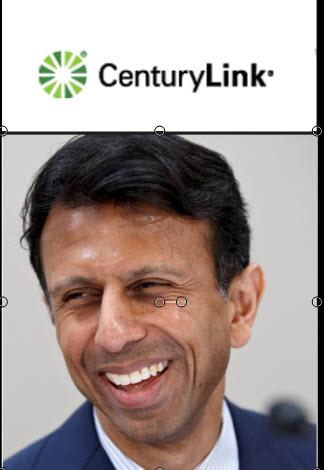 Ever since Louisiana Governor Bobby Jindal left the Presidential campaign, he has embarked upon the long journey of rehabilitating his miserable reputation in the state among voters.  Thus, he has been hitting the road trying to explain how good of a job he has been doing while he governed this state via remote control.  The latest is a press release his office has sent out regarding his meeting with the Vice President and CEO of Century Link, William E. "Bill" Bradley.

Here is the press release:

Today, Governor Bobby Jindal and CenturyLink Senior Vice President and Chief Information Officer William E. “Bill” Bradley met to discuss the company’s progress in implementing its new Technology Center of Excellence. Formally opened in March 2015, the 300,000-square-foot facility – an expansion of CenturyLink’s existing 365,000-square-foot corporate headquarters in Monroe – will help fulfill the company’s 2011 announcement of an 800-job headquarters expansion. These jobs, combined with a prior 350-job expansion announced in 2009, will contribute $67.7 million in new annual payroll by 2016, pushing CenturyLink’s statewide annual payroll in Louisiana beyond the $200 million mark. The company employs 2,500 people in the Monroe area and more than 2,800 statewide.

A global leader in cloud infrastructure and hosted IT solutions for business customers, CenturyLink represents the No. 1 economic driver company in Northeast Louisiana and one of the Top 10 economic drivers statewide in Louisiana’s private sector. In addition to the 800 new direct jobs, Louisiana Economic Development estimates the latest headquarters expansion and retention project will result in 1,170 new indirect jobs in the greater Monroe area. The building project created an additional 350 construction jobs at peak activity.

Governor Jindal said, “Louisiana has made unprecedented gains in economic development over the past eight years, and CenturyLink represents one of our important success stories. This Fortune 500 company is one of our state’s leading private-sector economic drivers, and its importance to the Northeast Louisiana region cannot be overstated. Partnering with CenturyLink through major acquisitions, we succeeded in securing two expansion projects that will keep the company’s corporate headquarters here in Monroe. Most important, we retained top-notch existing jobs and are creating 1,150 great new jobs for Louisiana families now and into the future.”

The CenturyLink Technology Center of Excellence includes a technology research and development lab, a network operations center, and collaborative office and meeting space. In the center, employees with network, cloud, information technology and other skills work together to create innovative new products and services for CenturyLink’s customers.

“CenturyLink is evolving from a traditional network communications provider to an integrated provider of advanced IP-enabled network, cloud, hosting and IT services,” said CenturyLink President and CEO Glen F. Post III, who joined other company leaders in meeting with the governor. “To help support this transformation, it is increasingly important that we are able to attract top talent, and we are confident the CenturyLink Technology Center of Excellence in Monroe is helping us accomplish this goal. Being headquartered in Louisiana offers our employees an excellent quality of life and has contributed to CenturyLink’s growth and success over the years.”

CenturyLink’s success in Monroe has led other major companies to identify the city as a prime location for their new investments. In February 2015, IBM announced it would establish a 400-job Application Development and Innovation Center in Monroe, which will serve as the anchor of an 88-acre, CenturyLink-affiliated technology park and mixed-use development near CenturyLink’s corporate headquarters.

These projects and others like them are indicative of the state’s economic achievements under Governor Jindal’s leadership. Since 2008, Louisiana has attracted world-scale energy, technology, corporate and manufacturing projects that are producing more than $62 billion in new capital investment and resulting in more than 91,000 new jobs.

The state now ranks higher in every national business-climate ranking than it ever did prior to 2008.Business Facilities magazine ranks Louisiana’s business climate No. 3 in the U.S. this year, with the state making the Top 10 for six consecutive years. Louisiana ranks No. 8 in the nation in Area Development’s Top States for Doing Business. Southern Business & Development ranks Louisiana No. 1 for business projects per capita, and Site Selection this year ranked LED as the No. 2 best-performing state economic development agency in the U.S. Prior to 2012, Louisiana did not rank in the Top 10 of any major business climate ranking.