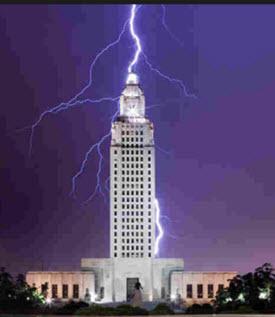 The Louisiana legislature has determined that it is raining a major budget shortfall, thus, it has tapped into the "Rainy Day" Fund, as requested by Louisiana Governor Bobby Jindal.

The Rainy Day Fund, formally known as the Budget Stabilization Fund, is designed to help cover the state's budget shortfall.

According to a House press release, the House of Representatives voted 87-13 to use the money. Five members did not vote. The Senate voted 38 - 0 with 1 member not voting. A two-thirds vote of each House was needed in order to tap the fund.

Jindal had asked state legislators to approve the withdrawal of $28.2 million from the fund as he was concerned with additional cuts to higher education budgets would have to be made.

Under state law, higher education and health care are not protected from cuts, as are some other budget items. Therefore, they usually bear the brunt of budget cuts.

House Speaker Chuck Kleckley said he was pleased with the decision by House members.

Before money from the Rainy Day Fund can be used, two-thirds of the members of each house of the Legislature must approve. Ballots were mailed to legislators on Monday, November 23, asking for permission to use money from the fund.

Under the law, to use the Rainy Day Fund legislators may vote in person or by returning the ballots by mail or fax. They had until 5 p.m. December 8 to vote. The Clerk of the House opened and counted the ballots today, also according to law.

According to the Constitution, only one-third of the fund may be used in a year to cover a shortfall not to exceed the projected deficit amount. Currently the fund's balance is $515 million.

More in this category: « Jindal touts his, Century Link's accomplishments during his administration--meets with CEO LAGOP says Jon Bel Edwards strong-arming for House Speaker »
back to top