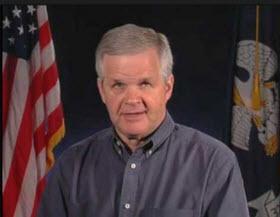 During Louisiana's recent statewide elections, I was doing a little research on a Democratic candidate for State Senate. I saw that the Louisiana Democratic Senatorial Campaign Committee gave the candidate $150,000. Wow! That was a lot of money in a state senate race. I decided to dig a little deeper. So I looked up the donor list of the DSCC. I was shocked to see the names of many big international corporations that gave the Democrats $10,000 or more each — names like Exxon, Dow Chemical, and Pfizer drug company!

The list went on and on. Yes, it was shocking! But then I decided to take a look at the comparable committee on the Republican side. Whoaaa! As I looked at the Republican list, a deep sense of nausea swept over me! Many of the same companies were on BOTH lists, including Exxon, Dow, and Pfizer! It was proof once again that whether the Democrats win or the Republicans win, the "establishment" — especially big business — always wins! Because no matter which candidate is victorious, the establishment will have their ear!

To some degree, they don't much care what the candidates SAY while they are candidates, because they know that after the election, they will get hold to the newly-elected officeholder and set him straight. Pure and simple, they buy influence and plenty of it on both sides of the aisle. All of which leads me to Donald Trump and why the establishment is in a red hot panic about the possibility that he will become the Republican nominee and, God forbid, be elected President of the United States!

The panic and the vitriol come from the establishment's realization that they CANNOT CONTROL Trump! He doesn't need their money, and he's not taking their money! For the first time in a very long time, they face the possibility of a President that they cannot buy, pressure, threaten, browbeat or control! Trump's refusal to take their money is one of the most significant things happening in this campaign. But of course the media doesn't talk about it much because they don't want the public to focus on it. After all, for years, the media has harped on the evil of big money influence on our politicians. Yet, today, when a candidate is leading in the polls without being dependent on the money of special interests, they are strangely silent. Yes, the establishment is scared to death of Donald Trump and for good reason!

The above was a Facebook post written by Woody Jenkins which has been published on Bayoubuzz with his permission.

Woody Jenkins, started his political career in 1972 when he was in college.  He represented the Baton Rouge area as a State Representative for 28 years and ran for US Senator, three times.  Currently, he operates Capitol region newspapers and is the President of the East Baton Rouge Republican Party.