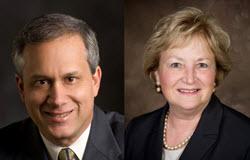 “These two appointees bring decades of experience and top-notch talent to the team,” said Gov. Edwards. “I am honored to have them on board and excited to continue the good work of the offices in which they both currently serve.”

Dr. Mary Livers, a native of Shreveport, Louisiana, has served in three states’ corrections agencies for over 30 years before returning to Louisiana. Named Deputy Secretary of the Office of Juvenile Justice in October 2008, Dr. Livers was attracted to OJJ’s reform efforts that began in 2003, and today she is a driving force in the transformation of juvenile justice in Louisiana. Having spent her entire career as a change agent working to improve the quality of life for adults and juveniles involved with the criminal justice system, Dr. Livers has tirelessly embraced and promoted just and humane treatment and is a strong proponent of evidence-based programming.

Dr. Livers is the President of the American Correctional Association (ACA), has served as Treasurer, served a term on its Board of Governors and been a member of numerous committees. She is a charter member of the Association of Women Executives in Corrections (AWEC). A significant accomplishment was her collaboration with other professionals on creation of a pilot training model for women in corrections that was adopted and used by the National Institute for Corrections.

She earned a bachelor’s degree and a master's degree in Social Work, specialized in corrections and community intervention from Louisiana State University. She went on to earn a Ph.D in adult and higher education with staff development and training specialties from University of Oklahoma.

John Ducrest, a native and resident of Broussard, Louisiana, was first appointed by Governor Blanco as Commissioner of the Office of Financial Institutions on June 8, 2004, and reappointed on January 10, 2008 and February 24, 2012. Ducrest served as Chairman of the Conference of State Bank Supervisors from January 14, 2011 through May 21, 2012, having previously served in several leadership positions with that organization and continues to serve on the board. Ducrest has also served on the Financial Stability Oversight Council (FSOC) since March 20, 2012.

Ducrest has been with the Office of Financial Institutions for 30 years. From 1985 to 1994, he was a Financial Examiner. In that role his duties included conducting safety and soundness examinations of financial institutions. In 1994, Ducrest was named Deputy Chief Examiner of OFI.