5 things, a NFL-retired Peyton Manning can now do 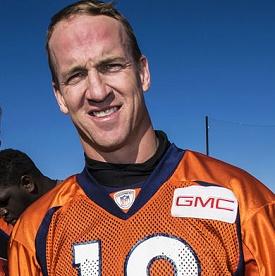 I am very familiar with questions of retirement, having made the decision to ride off gracefully into the sunset several years ago. For the youngsters out there, before you reach such a monumental decision, have a plan for what you are going to do. Watching FoxNews or CNN until the cocktail hour is not a plan. Which brings us to Peyton Manning, who wisely took the advice of this column and its multitude of readers and decided to retire from the NFL. So now the question is: “What’s he going to do?”

When mere mortals open the corral gate, they are looking at a much shorter time frame to fill up with such activities as gardening, macramé, reading the classics or even, horrors, trying to pour your life’s experiences onto a clean sheet of white paper. I found an article in USA Today that said a person who was 65 years old in 2012 can be expected to reach 83 for men, and 85 for women. But when you are only 40 and have just completed what might have been the greatest season at your position in NFL history, you’re probably looking at another 50 years to fill. That is why it is important for Peyton to make the right decision.

While the rest of us hope to save enough to carry us that last two or three decades, Peyton has banked around $250 million in his career. You and I could find plenty to do with that kind of cheese, but with career high achievers it’s not about the money. It’s about the challenge and the accomplishment. You master one world, then you look for the next world to master. So what new world is there for Peyton to accomplish? Let’s look at a few possibilities.
He could be the permanent guest host on Saturday Night Live, on which he has appeared several times. Peyton has shown his great sense of humor and comfort in front of a camera and studio audience. And who can forget his classic skits, including the “Meatloaf Lovers Dream Car,” “the college basketball halftime locker room dance,” or, my favorite, as a kids’ league coach who turns into a monster who bullies children and teaches them how to steal cars. But SNL hosts are at the mercy of the writers and Lorne Michaels, so this probably isn’t a full-time work.
He could become Stephen Colbert’s fill-in on the Late Show, but could he endure a show in which obscure stars and political candidates are the common fare? He could become national poster boy for Papa John’s Pizza. Oh, he already has that gig? Some people think he will become an NFL analyst and delight in second-guessing Bill Belichick’s wardrobe and his every coaching decision. That would be worth one season, but I don’t see Peyton working on that side of the camera for long. He could even go into coaching, but the graveyard of former coaches is filled with stars who tried and failed.

However, one possibility seems to make more sense than others. More likely is the model set by Hall-of-Famer John Elway, who, as Broncos GM, traded for Manning and then reaped the benefits. Elway was a Denver icon, and returning to the spot of his greatest triumphs only fueled his afterlife. Peyton could take a hint from Elway and give a call to Jimmy Irsay, owner of the Colts, who should welcome the opportunity to bring back Peyton. He could start as a senior adviser and the face of the franchise and then see where it goes.

The unspoken option, at least in the minds of the Who Dat nationals, is for Peyton, his father Archie and brother Eli to head up a group that would buy the Saints from Tom Benson. That won’t happen as long as Benson is breathing, but I would not count it out as a long-term option for Gayle Benson.

Two other Hall of Fame athletes became owners in varying degrees. Magic Johnson’s 10-year ownership interest in the Lakers that ended in 2011 was largely ceremonial and not in any true decision-making sense. On the other hand, Michael Jordan became an investor in the Charlotte Hornets (nee Bobcats) in 2006 and became the controlling owner in 2010 when he bought out Robert Johnson. Jordan went back home to North Carolina, and his ownership is a fitting culmination for the man many people say is the NBA’s all-time greatest star.
Could the NFL’s all-time greatest QB pull off the same feat? We will know soon enough, but an executive or even ownership position in the NFL is probably more likely for Manning than becoming permanent host of Saturday Night Live!
Visit Jim W. Miller's blog at JWMillersports.com
Tweet
Tweet
Published in News

More in this category: « Blaming John Bel Edwards for Moody's Louisiana downgrade is a laugher Why is Louisiana Treasurer Kennedy sniping at Governor Edwards on contracts? »
back to top