Bernie Sanders feels the bern for black poverty, but not white? 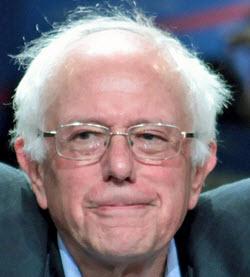 This is incredibly ironic because Sanders, a committed socialist, was relatively poor until the age of 40. He was never able to earn a living until he started in politics. Previously, he did odd jobs, drove an old Volkswagen Beetle and lived on public assistance.

Once he started getting elected to office in Vermont, he obviously forgot his impoverished roots. However, Sanders is not the only white person who has had to deal with poverty. In fact, today, according to the latest U.S. Census data, all of the poorest counties in the country have an overwhelmingly white population, at least 95%. According to Peter Hasson of the Daily Caller, “The nation’s poorest county, Owsley, Kentucky, is more than 98% white, and it’s only getting poorer.”

Hasson cites examples of other extremely poor counties in Kentucky that have an almost exclusively white population. These folks are undoubtedly quite surprised to know that Bernie Sanders believes that they do not know poverty.

In our country, there are white residents in ghettos and white people comprise the majority of our welfare recipients. At the debate, Sanders was just displaying his utter ignorance and reciting nonsense from the Democrat Party playbook. In this familiar script, only minorities understand real suffering and oppression in this country. This is complete pandering and while it may help Democrats garner a solid majority of minority votes, it helps to drive more white voters to the Republican Party.

In fact, it is pure racism that needs to be correctly identified. Of course, the media never tells the truth about Democrats and loves to demonize only Republicans. If a Republican had made such an inaccurate and asinine comment about African Americans, the media would be in an uproar. In this case, there has been virtual silence even though Sanders was completely wrong.

This type of racial pandering is nothing new for Sanders. Several months ago, he aligned with the radical group Black Lives Matter and agreed with their agenda. Even worse, he allowed their representatives to hijack one of his campaign events.

We should expect more of the same from both Sanders and Clinton in the weeks ahead. It is just symbolism and rhetoric because the results show that the policies of Sanders and Clinton have done nothing to help African Americans and other minority groups. In reality, these socialist policies just trap more minorities and whites in government assistance programs that do not provide real opportunities.

There is certainly poverty among Democrats, a poverty of fresh thinking.