Anoint Trumps or riots, the forces of good over the bad (Video) 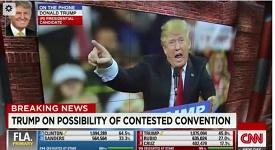 It appears that Donald Trump believes if he were to go to the convention with a strong lead,  that he should automatically be declared the Republican Party nominee.  His argument goes--If he were not to receive the nomination after the primary and caucus process, then the will of the people will be undermined and the result could be riots.

He is not alone in believing that only he should be chosen the GOP nominee.  His followers approve of his speaking out against illegal immigration, putting a hold on any Muslim entering the country, denouncing free-trade agreements, not being beholden to any contributor, standing up to institutions that fail and speaking his mind, without borders of caution.  They feel that any act by party leaders and others who would undermine his nomination would be betraying democracy.

Yet, there are millions who are concerned of a Trump presidency for many reasons.  Trump and many of his followers paint them as being protectors of political correctness, violators of free-speech, and promoters of policies that has crippled the country--making it a 3rd world nation.

He easily paints many of these people in very simply terms--as “bad people” and his followers as being “good”.   His followers are the supporters of decency and peace while those opposing him are the rules-breakers and violators of human decency.

Above is a short video I created that discusses these issues.

Crouere: Dump Trump means a President Hillary Clinton
by Jeff Crouere
The hysteria coming from GOP conservative purists and party insiders about Donald Trump is reaching ridiculous proportions. Talk show host Glenn Beck has compared the Republican frontrunner to Hitler, while Nebraska Senator Ben Sasse has thundered that he will never support Trump if he is the nominee.

More in this category: « Edwards's DNR pick of Blanco's son-in-law is another Louisiana rock in shoes Bad legislative sausage, a secret deal, a near-Louisiana budget disaster: Tyler Bridges interview »
back to top