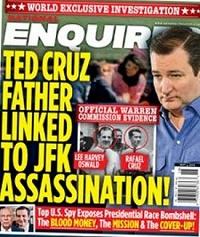 And that “oh” stands for “Oswald,” as in Lee Harvey Oswald, a former New Orleanian who was accused of assassinating U.S. President John F. Kennedy in Dallas, Texas.

Man oh man!  Whoever thought we’d be talking about assassins, those who handed out leaflets with assassins, and the sons who grew up to want to become U.S. presidents?

But then, honestly, whoever thought that a card-carrying self-described Socialist like Bernie Sanders could even scorch Hillary Clinton’s candidacy?

Whoever thought that thrice-married Donald Trump would stop making millions long enough to spend millions on what seemed to be his own dark-horse candidacy?

Whoever imagined that a sexy, babalishous hot mess from, uh, not really sure where, but somewhere Eastern European, might one day be America’s First Lady?

Just when you thought that the U.S. Presidential Primary Elections could not get any weirder, here comes The National Enquirer, showing old 1963 photos of a man who looks a lot like Republican Senator Ted Cruz’s father, Cuban-born-and-raised Rafael Bienvenido Cruz, handing out pro-Fidel Castro “Free Cuba” pamphlets with Lee Harvey Oswald.  They are standing in front of the now-closed International Trade Mart in New Orleans, where Rafael Cruz was living after he obtained a degree in chemical engineering and mathematics from the University of Texas in Austin.

Rafael Cruz used to live in New Orleans after he left Cuba and before he moved to Canada, where Rafael his son, presidential candidate Ted, was born in Calgary, Alberta.  Rafael, who worked for years in Canada’s oil industry, didn’t disclaim his Canadian citizenship until 2005.  His son, Ted– the U.S. Senator from Texas who’s running for president– didn’t officially disclaim his natural-born Canadian citizenship until 2014.

The pamphlets that Kennedy’s assassin Lee Harvey Oswald and the man who looks just like Rafael Bienvenido Cruz were handing out in that 1961 photo were the work of the “Fair Play For Cuba Committee”– a pro-Castro Communist group.

This is the kind of group that the late U.S. President Ronald Reagan made his career out of “outing.”

Why, one wonders, did Rafael move to Canada in the first place, when he had already landed, high and dry, in the land of the free and the brave?  Why did Ted Cruz’s father leave the United States– a place so good and gracious that it permitted people who supported Cuban freedom fighter-turned terrorist-turned president-turned dictator Fidel Castro to hand out political pamphlets criticizing U.S. foreign policy in a time of crisis?

Why did Rafael Cruz leave the wonderful United States to head even further north, to become a citizen of Canada’s chilly climes?  Was it just about the almighty buck?

What did Rafael Cruz not like about the United States?

Or did he have to get out of Dodge for some reason?  Had the sheriff given him until sundown to depart?  Was Ronald Reagan sniffing him out?

Is the National Enquirer’s 1963 photo of Lee Harvey Oswald and the man who looks like Rafael Bienvenido Cruz the key?

You remember Lee Harvey Oswald.  He was the alleged assassin of U.S. President John F. Kennedy in Dallas, Texas.  After savagely shooting “JFK” and, more mysteriously, Dallas Police Officer J.D. Tippit, Lee was arrested and held in prison where the local gendarmes made sure to walk him all about, back and forth, in the parking garage before scores of press, reporters and bemused bystanders for no good reason and without any protection, so that eventually Jack Ruby (aka Jacob Leonard Rubenstein), a Dallas strip-club owner, could casually stroll by and savagely shoot Oswald in the abdomen and kill him.

Because dead men tell no tales.

And who knows what else Oswald might have said, had he lived to talk.

Do you think that Oswald might have said something like, “My good friend, Rafael Bienvenido Cruz, will vouch for my innocence?”

But Oswald didn’t live to talk.

And Jack Ruby made sure of that.  Instead, Lee Harvey Oswald was forever silenced by Ruby– Kah-blam!, And the mystery of how and why the president known as “JFK” was assassinated would never be solved.

Of course, Jack Ruby could have helped shed some light on things even though Oswald died.  Ruby was immediately wrestled down after shooting Oswald and was arrested.  But Ruby died without ever coming completely clean and telling all.  Instead, Ruby told just enough to get– incredibly– himself a new trial on his murder conviction– a trial he never lived to see because his body was found to be riddled with cancer, everywhere.  He then died immediately.

It seemed to come on quite suddenly.

Just like America’s favorite Cuban-born American, Ricky Ricardo, used to say about his real-life and television wife, Lucy, it sounds like U.S. presidential candidate Ted Cruz and his mysterious father, Rafael Cruz, got some “s’plaining to do!”

More in this category: « Trump, Cruz, Indiana and Lee Harvey Oswald behind the grassy knoll Virtual Reality exhibit of YouVisit.com at Collision Conf in New Orleans 2016, watch your step »
back to top