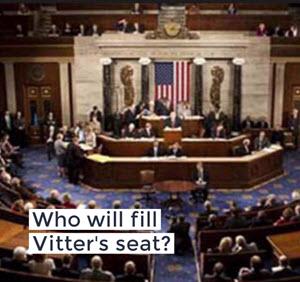 The controversy developed when NFIB invited only four candidates to participate.  Currently, there are 11 potential candidates.
The four invited to participate were Republicans Charles Boustany, John Fleming, and John Kennedy  and Democrat Foster Campbell, who did not participate because of a scheduling conflict.
NFIB defended its decision to invite only those candidates by deciding that a candidate had to have received five percent of the vote in a May poll  conducted by Southern Media and Opinion Research, which it said was the only independent poll.
In that poll, Kennedy had 32%, Boustany 10%, Campbell 9%, and Fleming 5%. Republican Rob Maness and Democrat Caroline Fayard both had 4% and were therefore excluded from the forum.
But Fayard was quick to note that the SMOR poll was paid for by Lane Grigsby, one of Kennedy’s major contributors.  She said in a press release, “Imposing an arbitrary restriction on who can participate in a U.S. Senate forum based on partisan polling data is undemocratic, insulting, and it smacks of insider, good ole boy cronyism.”
If NFIB had used an average of three recent polls on the U.S. Senate race, Fayard would have been included in the forum.  The averages are Kennedy 29%, Campbell 13%, Boustany 11%,, Fayard 9%, Fleming 7%. Maness, with 4%, would still have been excluded.
There will certainly be more polls and forums to come.  It will be interesting to see what guidelines other forum sponsors will impose.

Governor boosts Campbell campaign
Governor John Bel Edwards gave a boost to U.S. Senate candidate and fellow Democrat Foster Campbell this past Thursday.
Edwards was the special guest at a high-dollar fundraiser for Campbell.  A large crowd was on hand at the 421 Texas Street venue for the event.
Campbell raised $300,000 for Edwards’ gubernatorial campaign with two north Louisiana fundraisers, and the governor returned the favor by attending the fundraiser for Campbell.
Edwards spoke briefly about the state’s current fiscal situation, then launched into an endorsement of Campbell, saying, “I need Foster in the Senate because he will be someone I can work with for the betterment  of Louisiana.”
Campbell is widely regarded as a favorite to make the runoff against one of the Republican candidates.