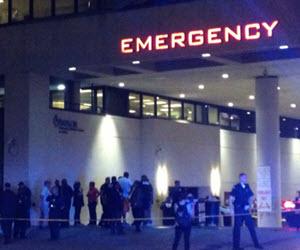 A protest march is scheduled for tonight on the edge of New Orleans’ uptown neighborhood to protest the shootings of Alton Sterling and other African Americans by police.

In email blast was sent out by, of all groups, Louisiana Socialists and Bernie Sanders supporters, telling operatives to churn out the faithful.

But is someone else planning to have a “blast” at the protest of a much different kind?

Last night, a sniper ambushed 12 Dallas police officers and killed 5 of them at a “peaceful protest.”  Dallas police, black and white, showed that they are made of the right stuff.  The first thing they did was protect civilians, some of whom darted dangerously about while trying to film it all on their cell phones.

Because there’s money in films of murder and mayhem.

The giggling and snickering online, wondrous-sounded exclamations of, “Oh, man, he shot that guy!” are simply sickening.

Truth is good, but something is going on here that is not right.

And that protest march planned in New Orleans tonight isn’t something spontaneous, but appears to be deliberately planned not only to tell New Orleans’ uptown neighborhood that “black lives matter,” but to push a Socialist agenda which includes breathing new life into the corpse of the candidacy of America’s best-known Socialist, Vermont’s U.S. Senator Bernie Sanders.

Ordinarily, a fringe candidate like Sanders would be long gone by now– heading back to Vermont to sit around the socialist campfires and sing “We Shall Overcome.”  But Hillary’s FBI exoneration and Director James Comey’s curious press conference and Hill testimony makes it seem possible that paramedics will soon be blasting Bernie’s dead presidential candidacy back to life.  “Get that CPR going!  Paddles up!  Electricity surging!”

Suddenly, Bernie’s political body’s not looking quite so blue anymore.  Hillary’s failed to hold even one press conference about her State Department debacle, and FBI Director Comey can’t stop talking about it, so Bernie’s followers may now have reason to hope.

Meanwhile, though, something else is going on here that is not right.

Early hints that Sanders’s proponents were willing to use violence emerged when tensions between Sanders’s voters and the Democratic Party exploded into reality after Bernie’s supporters “acted up” at the Nevada Democratic Convention.  Sanders’s Socialists tossed chairs and screamed at Hillary supporters.  “The convention concluded abruptly after security staff no longer felt it could ensure the safety of the participants, many of whom were yelling and throwing things,” wrote The New York Times.  Protestors then threatened the life of Nevada’s Democratic party chairman, Roberta Lange.

One would think that Bernie would tell his supporters to back down.

Or rather, he didn’t do much.

While stunned Democratic Party leaders immediately told Sanders to call off his wolves, Sanders replied with this single sentence: “Our campaign of course believes in non-violent change and it goes without saying that I condemn any and all forms of violence.”

But then, he ranted against what he claims is the Democratic Party’s interference with the election process.  “Democratic leadership used its power to prevent a fair and transparent process from taking place,” Sanders scolded, and then continued his rant blasting all the injustices he claims to be suffering because of Hillary’s supporters.

The Democratic leadership did little more than scratch their heads: Senate Minority Leader Harry Reid of Nevada had a brief hissy fit about “Bernie’s” failure to reign in his minions: “Bernie should say something—not have some silly statement,” he told CNN. “Bernie is better than that.”

But is Bernie “better than that?”

Now, America is plunged in a wave of killings, protests and violence from Baton Rouge to Minnesota to New York and now Dallas.  Police chiefs and politicians are scratching their heads and shrieks of “racism” are cascading across America.

Then, this morning, a little “blast” of information was sent out across the internet, urging folks to rally tonight in Uptown New Orleans in support of Bernie’s Socialist movement and “black lives.”  The list was startling in that it appears to be sent to well-known pricey educational institutions as well as facilities that receive state and federal monies for operating for far more benevolent official purposes.

What the hell is going on?

If you received that email, don’t go to that protest tonight.

Someone may want you to die so that they can make a political point.

Stay home.  Hug your kids.  Fix a good meal together and play some games.  Do something with your family.  Lock your door and stay safe.

Do you want more death?  Justice is fine, but the risk to life and limb is enormous.

A protest march is scheduled for tonight on the edge of New Orleans’ uptown neighborhood.