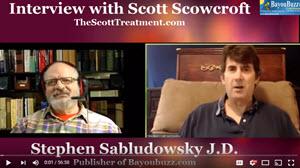 Online video is moving in multi-directions, faster than the speed of light.

There are many reasons for such acceleration and diversity of video communications . Now, the average person now is connected with smart phone, pretty good Internet bandwidth, powerful computer, outstanding video camera, audio and more.

Online video, while in its infancy still, has made incredible strides over the past decade and in particularly this year, 2016.

On Sunday, I interviewed a good friend of mine who I actually met online via the beginning of the Google Hangouts era, Scott Scowcroft of the TheScottTreatment.com. Scott has been heavily involved in the online video and streaming communities and is well respected for his skills and vision. He comes into this discipline with his own communications background and an understanding how the various hardware and softwares,  interface . In many respects, he has seen the future of online video, knows the opportunities, testing out various technologies and likes what he is seeing.

During the video interview, we discussed the past, present and future of online video and streaming.  The first segment focused upon the past, the middle segment targeting the present and of course, with the latter footage, addressing the future.

Scowcroft knows the costs and investments of time equipment and money involved in putting together community television programs.  He described the current online cost of delivery and infrastructure which he says in many cases provides better quality video at an unthinkable low cost.

In discussing the past, Scowcroft took us through the types of technologies we were using to launch into the online video streaming age, particularly, with Google hangouts. Many mishaps, technology glitches and failures marked the early hangouts efforts.  Over the past few years, things have changed dramatically. Currently, there are many platforms to use online for streaming, video editing and transmission. Scott discussed some of those platforms and delineated some of the similarity and differences.

While Google video such as handouts have sputtered over the past two years, the same cannot be said about other social media entries such as Facebook. Scowcroft said that Facebook is where the audience is so being able to create video for a specific Facebook audience is just the beginning of this exploding era of modern communications.

What does the future hold? From all viewpoints, it obviously will only get better.  Due to video, Scott feels more emphasis will be on the computer’s CPU and video hardwares.  The CPU is especially important to obtain quality streaming.   As a result, the quality of the product will certainly improve. Also the various applications for online learning, sharing, tutoring, instructing, collaboration will help those industries gain traction.

Keep in mind, we conducted this via Facebook Live—that social media’s new and extraordinary technology.  Although Facebook only offers at this point single-casting, we devised a way to successfully create online video content with more than one person on camera at remote locations.  Facebook will be deploying one-to-one live streaming later this summer.  Already, we have expanded that number to three involved in the online conversation.

I believe that you will find Scott Scowcroft’s insights very useful as he offers specific suggestions, products and services that can now be easily obtained, all that enhances the online video and streaming performances.

More in this category: « Treasurer Kennedy says Dardenne will read 19,000 Louisiana contracts, here's the update Update on Louisiana's US Senate election $ race »
back to top