Trump over Clinton by 5 in Florida, Interview with Louisiana pollster John Couvillon 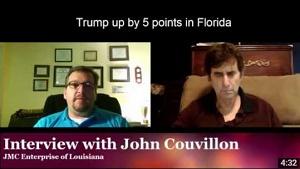 Two recent polls, including one conducted by Louisiana pollster John Couvillon of JMC Enterprises of Louisiana, showed that Donald Trump has made strong gains in the State of Florida--a very important swing state and perhaps a state Trump needs to carry, in order to win the presidency.

Couvillon and Stephen Sabludowsky, Publisher of Bayoubuzz.com, discuss the results in a Facebook Live interview on Tuesday.

The Couvillon poll shows Trump up by five points. The poll was completed this weekend and it followed a ten days for Hillary Clinton which the Bill Clinton-Loretta Lynch meeting and FBI press conference,  and a congressional hearing focused upon Hillary Clinton’s email scandal.

Another poll, released today, by Quinipiac University also has Trump ahead, however, by three points, 42-39 percent.  However, a month ago, the same survey showed Clinton up by 47-39 percent, eight points.

Couvillion's poll was conducted electronically. It was the first time that he has polled Florida this election season although he said it will not be his last.

Below is a summary of an excerpt of a Bayoubuzz interview with Couvillon, specifically focused upon, his poll results in Florida.

The Florida poll just concluded this weekend, shows Donald Trump with the lead in Florida, by five points. The poll also shows that Marco Rubio has weak reelect numbers and is vulnerable with regards to his November reelection.

Couvillon has not pulled Florida during this election cycle, but he does intend to do so, in the future. The poll shows that both parties and candidates can count on their respective bases--Clinton has the black and Democratic voters and the registered Republicans are "solidly"  in Trump's corner. The poll also indicates that he is decidedly ahead among independents and among Hispanics.

The Florida Hispanic vote are different from those in other states because they are more conservative with a Cuban and anti-Communist population.  Florida also has a number of voters who have escaped the communism in Venezuela.

However, the newer generation of Hispanic voters, even coming from Cuba, are not tied to anti-communism and Republican party as their parents.   Despite his many gaffes and slight resources compared to those of Hillary Clinton, Trump has been able to make the election competitive.  He is not running as many ads, is behind in the ground game and lacks the organization that Clinton currently has.

More in this category: « Obama's leading America's Rush to Judgment, fall to violence Pollster Couvillon talks Fayard vs. Campbell,Louisiana US Senate Race »
back to top